As mentioned in the previous installment, the four companions, Caedmyn the graceful nano, Grayden the glaive who commanded mental powers, Caracol Vus the strong blademaster, and Fisher, the jack who crafted illusions, had activated an ancient vehicle. That vehicle now sped through an underground tunnel, carrying the four of them in the direction that the metallic heart guided them.

They rested as best they could while the hovering cylindrical conveyance sped through the darkness. A strange sound interrupted their respite, however. Something had fallen atop the top of the vehicle. Next, they heard it move across the surface above them. Caracol Vus climbed the ladder to the hatch to investigate.

The creature clinging there resembled a featureless ape without a head. Its stooped, broad body seemed to be made primarily of a bright green, viscous substance, its shape dictated by a thick, translucent membrane. To Caracol Vus, it seemed like a fluid-filled synth bag with a humanoid shape. It lunged at him, and he tried to escape back down the ladder. The green thing followed. Its body was too broad to fit through the hatch, but the membrane that served as its flesh was extraordinarily maleable, and it squeezed through the circular opening into the interior of the vehicle. 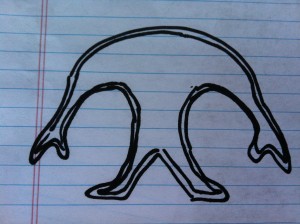 Grayden immediately attempted to communicate with the creature using his telepathic gift. He felt his mind touch not one mind within it, but a multitude. He didn’t seem to be able to send a message, for his voice was but one among far too many, but he got an idea of what the minds were saying to each other:

Caracol Vus attacked the intruder, slicing into its membrane with his well-crafted sword. As he did, the liquid inside sprayed out, filling the interior of the cylinder with choking, greenish mist that settled upon the floor in a thick, gelatinous residue. With this loss of mass, the creature could not keep its shape. Like a partially deflated balloon, it flopped upon the floor but still attempted to defend itself with its flaccid arms. A blast of force from Caedmyn and another slice from the glaive’s blade and the creature was finished, but not before the green mist filled the mouths and noses of most of its foes.

Meanwhile, Fisher heard more noise from behind, in the cylinders connected behind them. He opened the rear door, and then the door into the next hover-vehicle in the chain. Another of the things had entered through the ceiling hatch there. It moved to attack, but he held it back with his quarterstaff in the space between the two cylinder-cars. Grayden and Caedmyn moved to assist and forced the creature back. It attempted to force its way forward again, but Fisher knocked it loose and it fell into the darkness.

The four of them sealed their vehicle’s entrances as best they could and attempted to catch their breath. Eventually, however, late in the day, the hovering caravan of gleaming metal tubes came to a gentle stop. They could hear that giant metal clamps descended from above them and locked the vehicle into place yet again.

Again Caracol Vus exited through the upper hatch to check the situation. He saw that there had been a third gelatinous creature, but that it had remained on top, and had been crushed by one of the metal pincers. He mused to himself that the clamps did not move quickly, suggesting that the creature had never encountered one before, and had no idea that it would destroy it if it did not move. Not even animal level intelligence.

The four of them happily exited the strange conveyance and found themselves in a multi-leveled chamber not unlike the one they had left on the other side of their trip. This area, however, seemed in far better repair. Exploring, they found some ancient mechanized consoles and Caedmyn scavenged a few new cyphers from it. Soon, however, they began to feel slightly weak. And tired. Each of them felt as though they were coming down with some kind of illness. The flu perhaps. They pressed on.

The labyrinthine complex stretched in all directions, but they followed the instructions of the heart and eventually found a sector of the place coated in hardened, organic material that reminded them of the egg chamber they had originally found under Tichronus’ manor just that same morning.

Pressing onward, they emerged into a tall, dark room thick with humidity and foul odors. A massive, serpentine creature coiled in the center. Spindly appendages circled its broad mouth that reminded the explorers of spider’s legs.

Caracol bravely entered the chamber, and made peaceful gestures. The serpent spoke in a low, hissing, reverberating tone, but they didn’t understand.

Then it tried a different language, and its words were clear: “Why are you here?”

“I have been told that you could remove the creature that has attached itself to my back,” Caracol said.

“Is there any way we can convince you?” Fisher suggested.

“I doubt it. You are of no consequence.”

“Who are you?” Grayden asked.

“How do you speak our language?”

“I have had to deal with creatures such as you before.”

The group wanted to ask more about their employer’s relationship with her, but the serpentine creature suddenly flared to anger. “You have brought The Enemy Here!”

“What do you mean?” Caedmyn asked.

“You carry the enemy within you. Allow me to destroy it immediately or I must slay you all.”

“She means the green goo we inhaled,” Fisher suggested. “It carried something with it.”

Devola bent down close to him, and showed that one of her limbs ended in a long needle. Before he could protest, she thrust it into the glaive’s arm and injected him with something. Not without trepidation, each of the other three submitted to similar treatments.

“Who is your enemy?” Grayden asked.

“It is a countless multitude. It seeks to infect my progeny and I. And thus assimilate us. I cannot allow that.”

“Perhaps we can help you fight them,” Caracol Vus suggested. “And then you can remove this thing on my back.”

“You could help me. And thus make yourselves of consequence. I would do this for you.”

“And I would survive the process?”

“I can make that happen.”

“How can we fight The Enemy?” Caedmyn asked.

“You cannot destroy The Enemy. It is too vast. But you could destroy the device that allows it to communicate with itself over vast distances. That would effectively prevent it from being a threat to me. I will not go, nor will I send my young–the risk of infection is too great.”

Without hesitation, Caracol said, “We’ll do it!” The others begrudgingly agreed.

Devola then described to them how to get to The Enemy’s device, and how to destroy it.