This is the tenth in a series of articles introducing The Strange. You can read the first one here.

The Strange has been designed to make the challenging tasks of game mastering as simple as possible and allow the GM to focus on what’s important. Rather than dealing with a lot of die rolls, modifiers, and rules minutiae, you can focus mainly on the flow of the story. This is not to say that you are the sole storyteller. The group is the storyteller. But it’s the GM’s job to pull together the actions, reactions, and desires of all the people sitting around the table, mesh them with the setting and background created before the session began, and turn it all into a cohesive story—on the fly. Sometimes this means using a heavy hand. Sometimes it means stepping back. Sometimes it means being open-minded. It always means giving the other players as much of the spotlight as you have as the GM, and attempting to give it to each of them in turn so that no one person dominates the narrative or the gameplay—not even you. The rules are your tools to tell a story, to portray a character, and to simulate the fictional world. The rules are not the final word—you are. You are not subservient to the rules. But you do have a master. That master is fun gameplay mixed with exciting story. The Strange has also been designed to make game mastering work the way that many experienced GMs run games anyway. The GMs who recognize that they are not subservient to the rules are often forced to work against the rules, to work in spite of the rules, or to use the rules as smoke and mirrors to cover up what they’re really doing (which is providing everyone with an exciting, compelling, and interesting narrative in which to participate). Hopefully, as a GM of The Strange, you will not find that to be the case. On the contrary, most of the rules were designed specifically to make it easier to run the game—or rather, to allow the GM to focus on helping to shepherd a great story. Upon first glance, it might seem that for a story-based game, there isn’t a lot of “story” in the rules. A wall, an enemy agent, a pit to leap, and a slaughter accelerator can all be more or less just summed up as a single number—their level. The thing is, The Strange is a story-based game because the rules at their core are devoid of story. A wall, an enemy agent, a pit to leap, and a slaughter accelerator all can be summed up as levels because they’re all just parts of the story. They’re all just obstacles or tools. 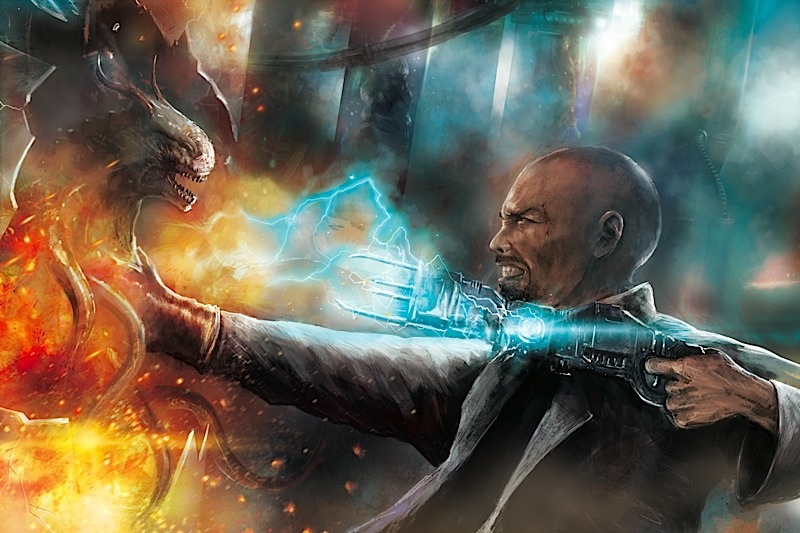 Stories aren’t built on game mechanics, they’re built on characters, setting, and plot. While players supply the first one (at least, the main characters), the GM provides the second and the group works together to create the third. The extensive game mastering chapters in The Strange go into depth on how to use the unique setting of the game to create myriad stories involving multiple worlds. There’s even some guidance for creating your own recursions (although there are many presented in the book as well). Even the campaign setting from your last game might be a recursion in The Strange. Because the mechanics are so simple, game prep is easy. Or at least, as easy as you want it to be. Prepping an NPC, an obstacle, a trap, or anything like that is as simple as rating it on a scale of 1 to 10. That’s it. No long, complicated stat blocks or mechanics minutiae. In fact, most GMs will often do this kind of thing on the fly during the session. Game prep, then, is entirely about planning the events that will happen, and setting the stage for the story created. That’s what’s meant by “as easy as you want it to be.” You can do it all on the fly, or you can obsess over the reaction of an important NPC to some event as much as you want. 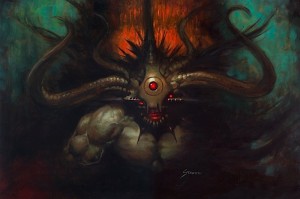 The business of running a game of The Strange, at the table, is intentionally made as simple as possible. While it’s challenging to describe the incredible vistas and amazing things that can occur in The Strange, managing the mechanics of the game is not. GMs don’t roll dice–players do. This frees GMs up to focus all their attention on managing the story. Rather than determining when the inkling reinforcements show up or whether the venom troopers break down the door, the GM just decides based on what makes for the most interesting game session. When you do this, however, you award experience points to the players. This is called a GM intrusion. It allows you to manage the game and guide the story, rather than letting the dice do it. First and foremost, The Strange is the game that you and the players want it to be. You are not subservient to the dice or the rules, but the other way around. Everything’s been designed to facilitate your GMing duties as much as possible, so you can focus on creating amazing stories in this boundless setting.