How Story Gives Life to Mechanics

The “magic” of an RPG mechanical effect is created when an interesting description of what’s happening in the world is paired with that effect. That description–the story–provides the context that gives the mechanical effect meaning, weight, and relevance. Without the story (also called flavor, and sometimes even “fluff”), naked game mechanics quickly lose their luster. And when I say “paired with” I mean that the description of what’s going in the world, complete with color, smell, and any other relevant story information, is provided in one seamless mechanical description.

Poor presentation style that separates the mechanics from story text is ultimately just as bad. A description under its own header or other separating feature removes the context from the mechanics, thus creating a perceptual problem. RPG players and GMs are subtly directed to pay attention to the mechanics text, while simultaneously signaled that the description, found in a different header, really isn’t all that important.

Take, for example, an encounter player character might have with a creature of The Strange called a variokaryon. The underlying game mechanics for the variokaryon could be encapsulated in two sentences of game mechanics:

The PC takes 5 damage each round until she escapes. While caught, the PC can do nothing other than use her action to attempt an escape.

Pretty simple, right? But being utterly devoid of context and story, the variokaryon’s attack, while powerful, seems somewhat flat.

Try on the following description of the ability instead:

A variokaryon attacks by vomiting a billowing sheet of white tissue that inflates to engulf a target in immediate range in a many-layered shroud, which is the variokaryon’s expelled stomach. The PC takes 5 damage each round until she escapes. While caught, the PC can do nothing other than use her action to attempt an escape. People and animals caught inside are digested, then sucked back in. Whatever’s left over after a meal, usually only a face, the variokaryon grafts to its own flesh.

[Side callout: (Something caught in the expelled stomach can’t see anything but suffocating folds of white. A victim can’t tell which way to run. Sound is muffled. But the victim’s sense of touch comes alive like paper to a flame, and burns.)] 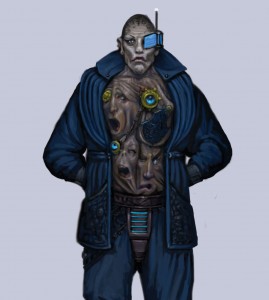 The variokaryon is not alone when it comes to underlying mechanical simplicity. In fact, most RPG combat abilities (whether creature or PC) boil down to just a handful of effects. Broadly speaking, those effects include dealing damage, moving the target, restricting the target’s movement, and restricting the target’s actions. And that’s about it. Varying the amount of damage, the amount of movement, and how restricted a target’s actions are will only get you so far. To make up the rest of the gap, you have to provide compelling context. (Illustration of variokaryon by Cathy Wilkins.)

Another example: When I was telling Monte about this blog topic, he responded with an example of his own. “Remember that D&D trap you guys triggered in Ggornorall’s room? It dealt only 1d6 fire damage, followed next round by 1d6 physical damage. But because it was called ‘worm fire’ and described as fire followed by worms burrowing up out of the burns on each victim’s body, you guys freaked out.”

Yeah, I do remember that.

Today’s takeaway: When combining story with an RPG mechanic, you’re adding variety, context, and life. Instead of having only a small piece of paper to draw on, you have a canvas of almost unlimited size on which to paint. Stories are possibly infinite in variety, which means that PC abilities, cyphers, creature abilities, artifacts, and other traditionally “crunchy” game objects have the same nearly unlimited scope. And for that, we’re glad.