Imagine this: you’ve decided to run an Invisible Sun campaign. The rules aren’t too hard to learn, the setting material is easy to reference, and there’s some great introductory stuff, so you’re off to a great start. But what’s next? What if Monte himself provided you with a bunch of unique ideas? And those ideas came with new artwork, maps, and handouts for your players, and even a few new clues to mysteries in the game besides? And what if, month after month, he kept sending them to you, and even occasionally sent you physical packages with even more deluxe props and cool stuff for your game? 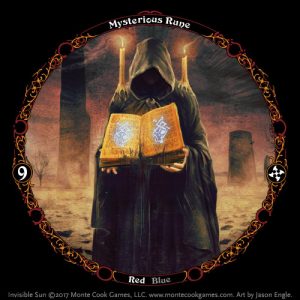 Or, imagine this: you’re a player in an Invisible Sun campaign. One day, you go to your mailbox and there’s a letter addressed to your character. Inside is an in-world missive about some new opportunity for your character—an invite to an exclusive party, a welcome letter to a hidden society, or a love letter from a secret admirer who would like to meet your character. You show up and the next game session with this, and suddenly it becomes a part of the game, and a part of your character’s story arc.

Too good to be true? What if it wasn’t? What if, once you started your campaign, you had the designer himself sending you notes, ideas, props, handouts, artwork, and so on every month? That’s exactly what the Directed Campaign is.

GMs getting the directed campaign will tell us when their campaign starts. Once they do, they’ll get access to a website where Monte will post valuable updates and offer discussion forums. More importantly, GMs will tell us about their group, and can make simple updateson their progress as the campaign goes on. Thereafter, they’ll receive a monthly notice to go download a new package. This package will include ideas for what could happen in the continuing plot of your game, tailored to the choices your players made previously.

But there’s more. Sometimes, this download will be accompanied by a package we’ll mail to you with physical props (items the characters might discover) like a ring, a booklet, or a matchbook with a scribbled clue. You’ll get about four of these shipments in the course of the year.

And there’s even more to it than that! With your permission, we’ll also send the players (up to five) a physical message as well. Say you’ve identified your friend John who likes to play the character who likes joining groups in games. We’ll send John’s character (at John’s address) a beautiful but mysterious invitation to come to a meeting of a secret society in the game. John will become even more immersed in the game and you’ll have a plot hook to run with!

We’re very excited about this option. To summarize, you will get:

(Preorders are open for Invisible Sun, and you can even preorder the Directed Campaign! Want to know more about the game? Take a look at What Has Been Revealed So Far!)