Player Perspectives is a regular feature here on the Monte Cook Games website, penned by guest writers—players of Numenera, The Strange, and the Cypher System. In this article, Brian Kurtz shares how he came to become a GM and what he’s learned from his first few sessions of the Cypher System and Fate. His recommendation? Dive in with both feet!

Prior to July 2013, the best way to describe my status with regard to roleplaying games would have been “RPG-curious.” My brother is a few years older than me, and he came of age at a time in the early 1980s when Dungeons & Dragons was a bona fide cultural phenomenon. While he and his friends fought against the cult of the reptile god and delved into caves near the keep on the borderlands, I was the annoying little brother who snuck into his room to pore over the fearsome creatures in his Monster Manual and Fiend Folio. When I was finally old enough to actually play, none of my friends had D&D on their radar, so my interest lay dormant.

In 2012, a web series called TableTop debuted which caught my interest, as I had dabbled in board games since a college friend had introduced me to Settlers of Catan. When the episodes for Fiasco were released, they blew my mind. I found some online roleplaying games that I could participate in, including a fun Star Wars: Edge of the Empire game, and then I “went dark” for a while after my second daughter was born. However, I continued to read about developments in the RPG world, including an interesting system used by this much talked-about game, Numenera. In May 2015, I began running my first-ever RPG, D&D 5e, drawing from work friends for my gaming group. After about a year we rotated GM duties, and it’s when I stopped prepping to run the game that it struck: a thirst, having once tasted the nectar, to drink from the creative fountain that running a game brings bubbling to the surface. 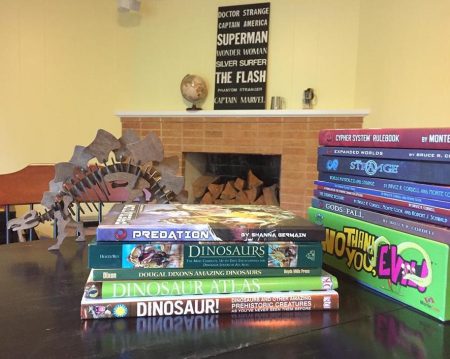 It’s not a reflection on D&D, but my appetite for RPG exploration has been whetted and I can’t help but dip my toes into other RPG systems. I’ve run No Thank You, Evil! a few times for my daughter and her friends. I ran an online one-shot of a home-brewed pulp-style game using the Cypher System, which was a blast. And when our GM had to cancel, my home gaming group let me try out running a game using Fate Core (with no advance notice). I opened up the book and ran a no-prep first session of the Venture City superhero setting, which went surprisingly well.

I learned enormously from these wildly different experiences; for the Fate game, I was amazed at how I could turn a few characters and ideas into a fun set of scenes, as I invented NPCs on the fly that engaged with the parts of my players’ characters that they seemed most interested in. A friend once told me that his GM style of choice resembles scrambling to lay tracks in front of him as the train barrels forward. It’s exhilarating, although I’m not sure my improvisational skills are quite up to the task to sustain that kind of thing yet.

My Cypher System pulp game had difficulty attuning to the player’s wants and creating the story on demand as it went. I worked long and hard on creating a world which explained a backstory for the events and MacGuffin in the game’s world, but in retrospect, I should have spent more time sketching out a few possible encounters, NPCs, and cyphers, and then been ready to pull them out and re-tool them on the fly to capture the creative spirit of my players.

With each foray, my ideas about what exactly I’m looking for in an RPG system are slowly coalescing. I’m aware of the vast array of systems that can scratch my itch for creative gamemastering, and I’m delighted to be able to sample the buffet. The Cypher System is attractive to me, because it is flexible enough to be used in many different ways, while containing mechanics that foster player engagement and influence on the narrative direction of the game. It’s also simple enough for a newbie GM like me to pick up and play. In their podcast Cypher Speak, Darcy Ross and Troy Pichelman did an outstanding episode comparing the Cypher System to several other gaming systems, including Fate, Powered by the Apocalypse games, Fantasy Flight’s Star Wars games (Edge of the Empire, etc.), Gumshoe, Savage Worlds, Fiasco, and others. 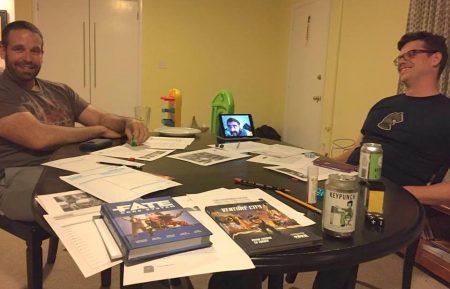 What’s next for me? I’m working on improving my command of Fate and I’d like to run some more of that. I’m planning to return to the Cypher System soon. I’ve got a Predation scenario gestating in the back of my mind, and when it’s ready to hatch, it’ll come tearing for my players with the fierceness of a Dakotaraptor. I recently took advantage of Monte Cook Games’ warehouse sale to imbibe all the books I could of The Strange, and there’s a million things I could do with that. I wouldn’t mind coming back to my Cypher System pulp game ideas, either.

I may not be the world’s most seasoned GM, but my creativity and sense of fun are surging right now, and I particularly love that RPGs are increasingly moving from being a hobby for a select few to an activity for all. The barrier to entry is lower than ever, the degree of inclusiveness is more accepting than ever, and the possibilities for storytelling are broader. I know some grognards would say that the golden era of RPGs has passed, but for me it’s just beginning. I’ve gone from ogling beholders to inventing my own aspects and cyphers—and having the time of my life.

Brian Kurtz is a young-at-heart mental health provider and dad to two daughters who lives near Cincinnati, Ohio. He’s currently composing a “Beat Bugs” themed game for No Thank You, Evil! for his kids and a Predation game for his gaming group, unless he gets them mixed up and runs a whimsical dino game for his kids and a dark humanoid insect game for the grown-ups.

This article is by a guest author—usually a player or GM of Cypher System, No Thank You, Evil!, or Invisible Sun.