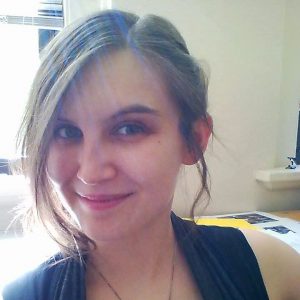 Monte Cook Games, LLC, the company behind the popular and award-winning tabletop roleplaying games Numenera, No Thank You, Evil!, the Cypher System, and The Strange, is very pleased to announce that Darcy Ross is joining the MCG team as Community Relations Coordinator. Darcy will join the MCG staff at the beginning of August, 2017.

Darcy has been an active leader in the gaming community and the MCG fan community for some time. She co-hosts the Cypher Speak podcast, has blogged for the award-winning Gnome Stew, and has worked to support marginalized voices in gaming with ConTessa as a staff writer and an event organizer. She is also completing a PhD in biology, studying the rarified field of snail shell development and evolution.

In the Community Relations Coordinator role, Darcy will continue to grow and support MCG’s multiple, overlapping communities. This includes retailers, as well as gamers congregating and interacting in online communities, through organized play, at conventions, and at their local retail stores. Darcy takes over the role from Sean Reynolds, who is moving to the position of Project Manager.

“We have an incredible community of fans,” commented MCG’s COO Charles Ryan, “and Darcy has been a leader in that community for several years. She’s a dedicated community builder with a great outlook and voice, and she really knows our fanbase and our games. We’re super lucky to have her join us in this role.”

“The Monte Cook Games community has been a huge force for good in my life over the last few years,” Darcy said. “I’ve admired both the creative tastes and the ethos of the MCG team for a very long time, so I’m thrilled to be able to work with this team and fans in an official context! It’s surreal and delightful to be joining such an excellent group of humans.”

The addition of Darcy to Team MCG further establishes this young company as an increasingly important leader in the RPG industry.