I know everyone says it, but it’s true: it’s crazy how time flies. It’s been 10 years since Malhavoc Press released my mammoth, deluxe campaign setting book, Ptolus: City by the Spire. That hardly seems possible.

Ptolus was a huge undertaking, and I feel, an incredible achievement for both editor Sue Weinlein and myself. If you haven’t heard of it, it’s an urban campaign for the d20 System. It is, in fact, the setting that I created to use as a playtest campaign while we designed 3rd Edition D&D. It’s a 672-page book with more than 130 pages of color artwork and maps, bound-in fabric bookmarks, two dozen handouts, a double-sided poster map, and a CD-ROM containing additional bonus products—including more than 350 pages of additional Ptolus adventures and source material. It has a textured cover by Todd Lockwood and binding like a tank (well, like a high school textbook). In other words, it’s an incredibly deluxe product. 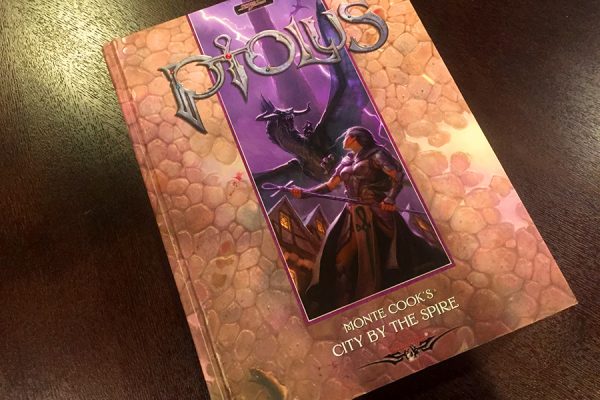 The content was enough to literally run not one but two d20 campaigns from levels 1 to 20 (I know, because I did). And it wasn’t designed like an RPG sourcebook. Its entire design was based on travel guidebooks. That means that every page that described locations had a little reference map in the corner showing what district it was in. When an NPC, item, location, or organization, was mentioned in the text, a page reference could be found in the margin where you could find more information (and often, a little image to help you remember—the book is so heavy with art its like has really never been seen since).

But that’s all ten years ago—so why do we care? That’s two D&D editions ago. It’s all just old news, right? Well, obviously I don’t think so. I think the material is just as relevant and cool, but let’s put that aside for a minute. What lessons can we learn from the product itself?

Well, funny story. As you can imagine, that was an incredibly expensive undertaking. Behind the scenes, the people we worked with were pretty nervous about such a risk. So you know what we did? We turned to the audience. We said, “we can’t do this book unless we know we’re going to sell a 1000 of them,” and took preorders. It was a big deal. A $120 book is expensive by today’s standards, but it was crazy ten years ago. We got our 1000 preorders. Sound familiar? Yeah, in a way, we were doing Kickstarter before such a thing even existed. And that idea really helped birth the idea of high-end, deluxe, expensive-but-worth-every-penny sorts of products that we see today. It proved that there’s an audience for that kind of thing. People willing and able to pay for quality. Going forward, I’ve tried to run the gamut—I’ve tried to make products that were very affordable for the cost-conscious gamer, and deluxe products for those who want something more. I’ve been both types of gamer in my life, so I understand and identify with both mentalities, personally. The Exclusive Numenera Boxed Set Edition—just nominated for an ENnie!—certainly falls into the category of the deluxe, pull-out-all-the-stops product. And looking ahead, I can see more of that approach in the future.

And Ptolus taught me the way RPG sourcebooks should be written. It’s not enough to just have some cool ideas and write them down. Ptolus shows that you have to think about how a book will get used—and the bigger the book, the more important that is. You see the legacy of Ptolus in every MCG product, with the page references in the side margins, and a real focus on not just the content, but the usability of the product itself. That’s important to me, because in the end, I want to make games that really get played.

I’ve heard from countless players over the last decade about Ptolus. I’ve heard about their campaigns, and what a joy the book is to use. A lot of people think of it as the cornerstone of their RPG collection, and that’s fantastic to hear. It’s gratifying to have worked so hard, and spent so much money to develop something of that quality, which has been so appreciated and enjoyed.