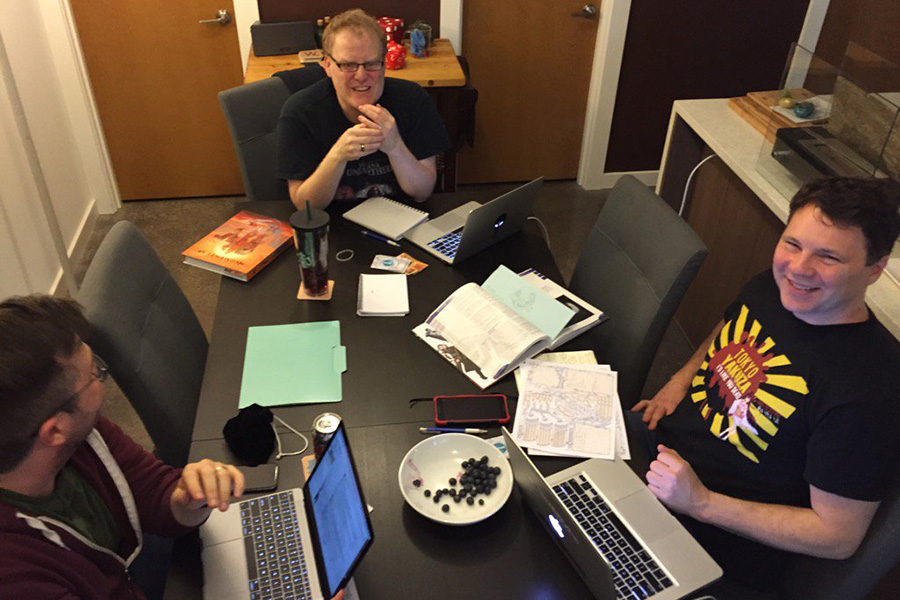 Special Features is a regular feature here on the MCG website, in which MCG team members discuss projects they’re working on, interesting MCG activities, or things that inspire their work. This column is written by Dennis.

When I was a kid, being a nerd (and boy, was I ever a nerd) was about loving a lot of different weird stuff.

That’s it. You just went out there and loved stuff. The concept of nerd culture wasn’t enough of “a thing” to do anything else.

You’d find cool stuff—in the backs of book stores, in the bargain bin at K-Mart, in the musty halls of the Compleat Strategist on 33rd. Stuff no one else knew about.

These things were rare.

Finding such things was like capturing some special kind of wildlife. Something you’d bring back in a box and take care of and study and take notes on. If you met like-minded people, you’d bring it out, you’d show it to them. Sometimes you’d even lend it to them.

But most of the time you’d run up and down the halls of your junior high school screaming about it:

Shout these things I did. I was the major nerd vector in my school, responsible for Amazing Spider-Man outbreaks, for the Gamma World pandemic of 1984 and for the great WATCHMEN infection of 1986.

I was like a dealer in sci-fi, horror and fantasy—all of it—throughout my school career. Video games, movies, comics, books. I had it all.

I loved it all.

It wasn’t easy to find these things. At least, from 1984 to about 1996, it wasn’t easy. You’d write away for catalogs next to grainy black and white pictures in the back of Dragon magazine, and then you’d obsess over a tattered flyer recieved from some odd business in Lake Geneva.

It was odd, but fun. It was about discovery.

Back then, there didn’t seem to be as much bitterness. There wasn’t a lot of us-or-them; hell, there wasn’t a lot of us. Certainly not enough for nerd-dom to be further split amongst itself. There was no sub-culture, just tiny pockets of the weird spread in odd places throughout the world. When you saw someone like you, no matter what they liked, you were eager to share—it was a rare enough thing.

Today, though, I see a lot of bitterness. Don’t get me wrong, there’s a lot of joy too. A lot of people discovering new ideas, getting the word out on things they love, and working hard to spread around what they think is fun, interesting, or cool. These people are awesome, but there’s also a lot of bile. A heck of a lot of bile.

There’s a lot of belittleing and yelling and complaining and a lot of politics and ideal-wielding and holier-than-thou speeches, and I don’t want to add to it here. But I do want to say this, just in case this is a revelation for someone out there (I doubt it, but it couldn’t hurt, right?):

You can dislike a piece of art, and it can still exist and be enjoyed by others. That doesn’t hurt you.

In nerd culture now, we’re spoiled, I think. There’s too much cool stuff. There are too many nerds. It’s too easy to get things, to judge things, to discard them. This explosion in numbers, availability, and interaction has seemingly diminished the value of these pieces of art over time. They are smaller now, or the sea of art is bigger. Either way, it’s easier to attack them.

I’m guilty of these things as well, but I’m trying to move on. I want to be one of the good guys here, and in such a case it means trumpeting the things I love about nerd-dom, not the things I hate. So, there’s that.

This has been your anti-rant of the day.