Getting the Word out about Worlds

You’ve probably already heard about Worlds of the Cypher System. Holy cats, are we excited! 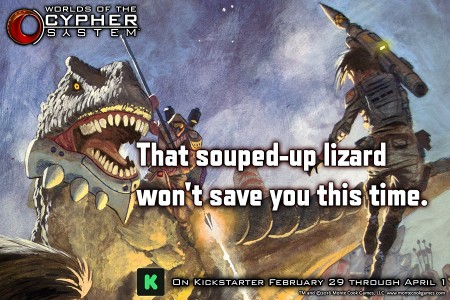 Now, we at MCG have been around the block once or twice with Kickstarter—in fact, our company owes its founding and a lot of its growth to crowdfunding success. But here’s a little secret: No matter how much we hone our skills, no matter how carefully we build our campaign, and no matter how mindblowingly awesome our products might be (note that I said “might” there!), our Kickstarter success still relies almost entirely on you.

Reaching Beyond the Community

We have a great community of fans, and we’re pretty good about communicating with you. But the big numbers in a Kickstarter (the numbers that add all those cool stretch goals to your rewards) come from getting the word out past that immediate community—to all the thousands of gamers who might have heard of Numenera or the Cypher System or Monte, but haven’t yet given us a close look. These aren’t people we can reach—but you can. Because they’re your friends and friends-of-friends—the people you’re in touch with in real life and on social media.

In our Into the Ninth World campaign last summer, we introduced a string of social media achievements for our backers. Share a post, write a blog, tweet a photo, or whatever, and help reach goals that unlocked cool little extras for the campaign. It seemed to work pretty well—it gave backers who wanted to help spread the word specific ideas for things they could do, and rewarded them (and us) with some neat extras.

(If you like the new form-fillable character sheets for Numenera, or the cool stuff at the Numenera Gear shop, you can thank Into the Ninth World achievements.)

This time, we’re taking it a step further. You can start on hitting those achievements right now! Here are a few things you can do:

All of these achievements will count toward the campaign’s achievement goals. So when the campaign launches on Monday, you could have some rewards already in the bag!

Here’s something else that can help out the campaign—and if you like Kickstarter in general, it’s good for you too. Kickstarter has a feature through which you can connect with your friends. When they back something, you get a notification by email. (I back a fair number of campaigns—maybe 15 or 20 a year—and notifications from my friends are the number one way I discover cool new projects.) Follow your friends, and many of them will follow you back. Just be sure to do it before the Worlds of the Cypher System campaign starts, so they get the notification when you back it!

What Else Can We Do?

Can’t wait for Monday—hope to see you there!