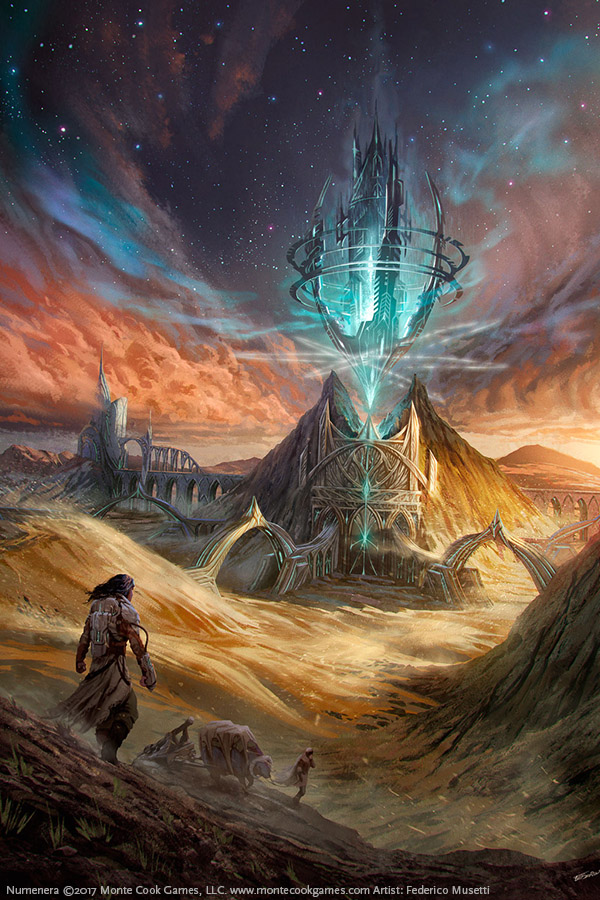 Please keep your hands and arms inside the vehicle and remain seated. We’re about to get a little smushy…

In the summer of 2012, I was ending a lot of things in my life. I’d just left my career as the editor of a technical coffee-roasting magazine. I was putting the final touches on my latest novel for my publisher and didn’t have another lined up. I’d recently been declared officially healthy after a long, debilitating run-in with Lyme disease. I was 40 years old, and ready for something new. I just didn’t know what that new thing might be.

Not long after, Monte was telling me about this new idea he had for a game, a game he’d had in his head for years, but hadn’t had the time nor money to make. That game was Numenera. As he described the original image in his mind that had inspired the setting, I quickly got caught up in his vision of the world. I wanted to play in it, right now. And I was excited by the idea of Kickstarting the project. Kickstarter was pretty much a brand-new thing back then, untested and unknown, especially in the RPG category, and we had no idea what that might look like. When Monte mentioned needing an editor for the project, I instantly said yes (actually, I might have said, “I’ll do it!” before he even asked). It felt like exactly what I’d been looking for: a new challenge, one where I got to fulfill my creative soul and take new and exciting risks while doing so.

Little did I know how much that choice would alter my life. It wasn’t just the start of a new career or a new creative direction. It changed everything.

The first Numenera Kickstarter launched, and we funded so quickly that I’m not sure either of us really grasped what was happening. It was a serious rollercoaster ride–excitement and nervousness and a whole lot of “is this really happening?” Monte made a joke that if crossed half a million, we’d do a movie as a stretch goal. And then suddenly, we crossed $500,000–and we were making a movie.

We’d already been hard at work on the game, but as soon as the Kickstarter closed, we immersed ourselves in the Ninth World. Monte was writing day and night. The kitchen table was covered in a giant piece of paper and whenever either of us walked by, we would add a location–a new river, a tiny aldeia, a mountain range, a weird structure. On a road trip along the west coast, we hashed out character options in the car, while we watched the forest and the ocean go by out the windows. We started playtesting, both in person and online, honing the character options, the game play, and the language. It was one of the best creative times of my life (and I’ve had some really fantastic creative times!).

But, of course, that was just the beginning. We quickly realized that we needed help to create and deliver on our promises. And so Monte Cook Games was born. Five years later, we have a crew of nine amazing and talented people, people (plus a number of contractors!) who I am proud to call friends, colleagues, and co-creators. People who bring something incredible to our small group, who always strive to make a thing better, more beautiful, everything it can be. We’re surrounded by players who love games, support each other, and raise the conversation and creativity of gaming to a whole new level. Along the way, we’ve made more than half a dozen new games, created a whole line of products (many of which have been translated into other languages), licensed Numenera to creative companies that’ve made amazing products of their own–like an award-winning computer game, a short film, multiple novels, a card game–and so much more.

Five years ago, I wasn’t sure where my life was going. Not even in my wildest dreams could I imagine that it would end up here. Every day, I get to work on new and exciting things–but I’ll be honest that Numenera holds a special and very large spot in my heart. It started everything. A company. A passion. A life unlike anything I’d ever dreamed. If you’re reading this, thank you for that. Thank you for everything.

Come chat with us tonight, September 21st, on Kickstarter Live! Monte is doing an AMA (Ask Me Anything) on Numenera Discovery & Destiny at 6 PM CT. Submit your questions, tune in, and chat with other participants here.