Player Perspectives: GMing with a Partner (in Crime)

Player Perspectives is a regular feature here on the Monte Cook Games website, penned by guest writers—players of Numenera, The Strange, and the Cypher System.

Hi there! We’re Liz Sander & Darcy Ross, two Gamemasters (GMs) who have been running a Numenera campaign together using the University of Doors as a framework (highly recommended!) Co-GMing has worked out very well for us, but it comes with its own unique set of benefits and challenges. 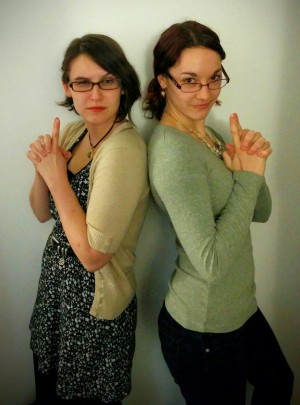 The most obvious feature of co-GMing is that you get to split the GMing role between two people. Usually, one of us acts as the “Universe Simulator”, describing scenes to players, answering player questions, and calling for rolls. This lets the other GM think ahead, make sure the players are engaged, and think up creative GM Intrusions. We switch roles back and forth throughout a session, and it feels seamless. An unexpected joy for us has been watching the other take the reins and improvise something interesting. You get to feel like a player for a moment, totally surprised and wondering what will happen next!

Another benefit is sharing the prep work. It’s more fun for us to brainstorm together, and we find that we come up with more interesting and engaging ideas when we’re developing them together. It really helps us avoid getting stuck while planning a logical and interesting adventure.

There are also challenges to co-GMing, even if your GMing styles mesh well. Early on, we discovered that we needed a way to communicate when we were working toward something, versus times when the other GM should feel free to contribute. We started using a notecard with “I’m going somewhere with this” on one side and “Jump in anytime!” on the other, but recently moved to a triangular-folded notecard with an additional setting: “HELP!”

The other major challenge is making sure that we both have the same picture in our heads. When we have different ideas about a character or location, conflicting descriptions get confusing FAST, for both us and the players. This is rare, but sometimes one of us will have to defer to the other when things aren’t clear, or in the worst case, have a short emergency GM meeting!

We’ve only co-GMed Numenera so far, but we think the Cypher System lends itself especially well to our style. One great example is establishing the Level/mechanics of a person, creature, or obstacle on the fly. With the Cypher System, it’s as simple as one GM indicating a Level and the other giving a thumbs up or down. Maybe jotting down the Armor. Done! For systems with more complicated stat blocks, it might be helpful to split up the task of narrator vs. crunch-managing more than we do.

GMing takes Effort, whether or not you’re sharing the job, and we don’t think co-GMing takes less time or is any less tiring. But it does take some of the pressure off of each of us, and we think the experience is more fun and much less stressful with a partner in crime.

Consider co-GMing your next game – it would be a great way to try out all the new Cypher System Worlds!

This entry was posted in GM Better. Bookmark the permalink.