Your Game: The Asset Deck

When I run the Cypher System, if someone is interacting with an NPC and the player says something really appropriate or clever, I lower the difficulty of the action. Sometimes to the point where there’s no roll involved at all. (Think about it—you very likely do this too. If someone asks a simple question politely of a NPC that is friendly, you don’t make them roll to see if they accomplish the task. Likewise, if the situation is more dicey, but the player still handles the conversation well, the difficulty is lower. It’s just logic.) Similarly, if someone attempts a different sort of task, but comes up with a clever way to do it, I lower the difficulty there as well (again, maybe to difficulty 0). 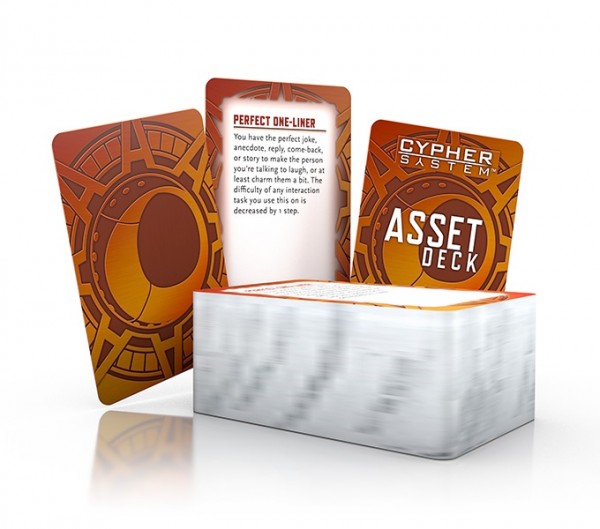 But what about the player who is often tongue-tied? Or isn’t a clever problem solver? Are they just out of luck? The game allows a player who can’t swim to play a character who can. Shouldn’t it allow a player who isn’t a smooth talker to play one? The answer of course is yes, and it already does. Anyone can be skilled in social interactions.

However, the erudite player whose character also has the skill is still a step ahead.

It’s that kind of thinking that first inspired the Asset Deck, which is a core part of our Cypher System Worlds Kickstarter going on right now. Unlike our other cool deck products, like the Creature Deck or the Cypher Deck, this isn’t a tool to facilitate things for the GM. It’s a whole new mechanic and I really like what it does to gameplay.

At the end of an adventure, at the end of an important encounter, or really anytime she wishes, the GM awards a player with a card from the Asset Deck. This can be a random card or not, as the GM feels is appropriate. The card provides an asset to a specific task that the player can hang onto and play whenever they wish, whenever’s appropriate.

Text from an Asset Card could include any of the following:

Perfect One-Liner: You have the perfect joke, anecdote, reply, come-back, or story to make the person you’re talking to laugh, or at least charm them a bit. The difficulty of any interaction task you use this on is decreased by 1 step.

Door Trick: You have a great idea on how to get this door open. The difficulty of any task involving getting past a locked, stuck, or sealed door is decreased by 1 step.

Let’s Use a Distraction: You have a great idea on how to sneak past or distract someone. The difficulty of any task involving stealth is decreased by 1 step.

These assets usually take the place of the modification you might normally use for a player idea. (But the kind of player who comes up with things like that will still likely come up with one to justify the card—you know they will. And that’s okay!) Not only do they allow a character to be a bit inspired even when the player is not, they give the player a bit more influence in the game for those really crucial actions.

The Asset Deck has 100 cards. We think it’s a great addition to the game. The GM has all these cool Cypher System decks, shouldn’t the players have some fun too?

The Asset Deck is coming soon, and is available to those who pitch in on the Kickstarter for Worlds of the Cypher System. Kick in now!

This entry was posted in Cool Tools. Bookmark the permalink.