Monte Says: Gotta Do My Homework

It’s sort of a common misconception that someone with a job like mine just sits down at the keyboard and makes things up all day. And while there’s some truth to that, and certainly there’s more of it in my job than someone, say, working on strictly historical fiction, or a licensed game that strictly adheres to an existing property, there’s more real-world research than you might think. In order to do imaginative original stuff, you’ve got to know a lot of real things. It has to be based on something. It’s like the old writing adage, in order to break the rules, you’ve got to know the rules. 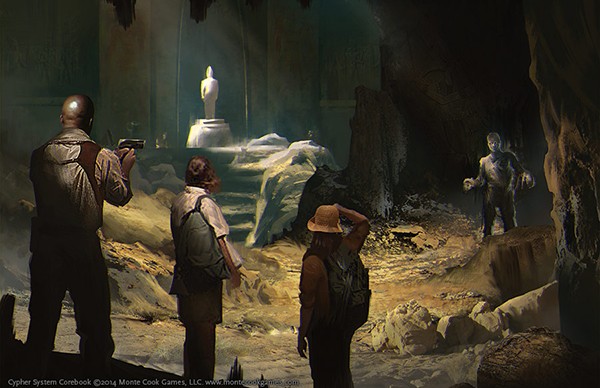 Take Numenera, for example. Even though it’s based around technology so advanced that it seems like magic, I actually spend a fair bit of time reading about actual, real-world cutting edge tech and scientific ideas. Crazy ideas like liquid armor in the Numenera corebook are inspired by real world ideas about smart fluid that changes its properties when exposed to magnetic fields. On the other end of the spectrum, doing research on actual belief systems dealing with magic helps me to create characters in the Ninth World who attempt to explain the science of the prior civilizations through the lens of mysticism or religion.

The Strange, of course, is demanding of even more research. You can’t create a recursion based around a fictional world without knowing the ins and outs of that work. Even if you’re dealing with a recursion governed by mad science, you’ve got to be familiar with the tropes of such things—and that involves research.

There’s also, of course, general game design research. That is to say, you don’t want to design game rules without exposing yourself to what other people are doing in the field. For me, I’m always more interested in reading about what other designers are thinking about game design—in other words, the reasoning behind what they’ve done—than looking at the actual specifics of the rules they create. Even completely incompatible rules systems might have reasoning behind them that provide interesting insights. And while I might not always agree with that reasoning, or perhaps might come to a different conclusion because I’m creating games for a different end user, it’s always good to have done the mental exercise of exploring why others do what they do.

Even after 28 years of doing this professionally, I pride myself in continually seeking out new things to learn and incorporate into my work. If you’re not learning anything new, I figure, what’s the point? Researching new information is what keeps the work intriguing and challenging.