“It might make more sense if you’re the one who rolls when you’re asking your own dinosaur to take an action.”

“Maybe… but if you’re going to apply Effort toward that, should it come from your own Pools? Or from the other player’s?”

“But what if I want my dinosaur to guard another PC? Who rolls to get them to do that?”

I’m sitting at Gen Con 2016, listening to a group of fantastic players put my current game, Predation through its paces. Predation is a sci-fi game of time travel, secrets, and dinosaurs and this is its first playtest.

The players are pretty much tearing it apart at every turn.

That might sound scary, but honestly, it’s the very best thing that can happen to a game during playtesting. It means that the players are invested, they’re thinking about the game, and they feel comfortable poking holes in the places where things might be a little thin. That’s the very purpose of playtesting, and mostly I just feel grateful any time a group of players joins me to help me tear down the thing I am making—because that just means I have to build it up better the next time.

Playtesting is one of the most important steps of designing a game, particularly if that game has new elements that haven’t been brought to the table before. In Predation’s case, it’s based on the Cypher System rules, so I didn’t need to test those very much, as they’d already gone through multiple rounds of playtesting on their own. What I did want to test was the various new character options, the setting material, and—most of all—the new element: dinosaur companions.

I know lots of games have companions, so that part wasn’t new on its own. But we wanted companions to be a unique and integral part of Predation—not just creatures that ran around alongside your character, but ones which acted more like actual PCs than NPCs. What we didn’t know was the best way to make them work.

We knew we wanted dinosaur companions to:

The playtest group at Gen Con ran into almost every problem that it was possible to run into, which was perfect. When I didn’t have answers, I asked them for suggestions, ideas, and solutions. Then I went back to the drawing board, reworking the companion rules based on everything we’d talked about. I then took the game to another fantastic group at Gamehole Con. Everything went more smoothly, but there were still some bumps—and some great ideas from the playtesters. 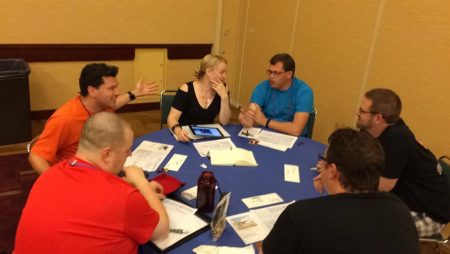 When playtesting, I listen more to what the players don’t like than what they do. What they like is important—it lets me know what’s already working—but what they don’t like feels like a true opportunity to make the game better. For me, it really comes down to: what are the players struggling with? Because if a player is struggling with something, then it’s possible that there’s a way to make that part work better. Of course, it’s also possible that the game just isn’t the right one for that particular player. One of my jobs as a designer is to figure out which it is, and make changes accordingly.

We went through about six rounds of playtesting for Predation (including one for Kickstarter backers) until we hit the point where the companion rules felt right. They seemed intuitive, the players embraced them, and when I watched other GMs run the game, I could feel them “get” it, and relay the concepts to their players with ease.

I’m really happy with the solutions we came up with for companions. Companions have their own short sentence, to give them skills and personalities. And each player runs someone else’s dinosaur companion. This is optional—you can run your own companion if you want to—but having another person run your companion creates a fantastic opportunity for surprise, humor, or emotional resonance, and gives each companion a unique personality. Because this is sci-fi, the companions are decked out with cool weapons, devices, upgrades, and equipment that help them interact with the characters, sniff out time anomalies, shoot lasers, and even more. 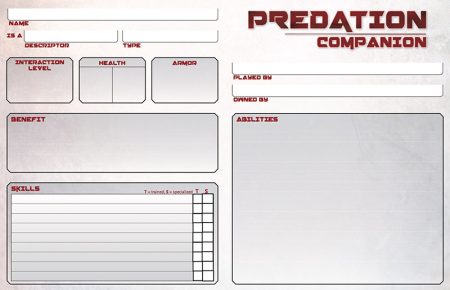 My favorite part of playtesting is always seeing the players embrace the final rules and really getting into the game. Watching the characters coax their triceratops to break down a door, command their T. rex to attack a foe, and convince their microraptor to dazzle and distract was amazing. And I can’t wait to see what else companions can do.

Predation is available for preorder now!