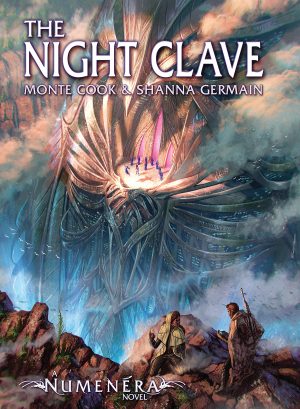 So. This is it. Her moment. She stands and fights and dies. Or she gets creative and finds a way to survive.

Aviend bobs the ceramic ball up and down in her palm. Once. Twice.

“Come on, you horrors!” she yells over the side of the crater.

The destriatch climb, pack and hound, becoming one and many, swarming up the side. They’re working together, laddering over each other up the steepest parts. Un-slowing. Plowing up the incline toward her.

She resists the urge to toss the cypher right the fuck now. She waits. A few feet. A few more. Her blood thumps in her ears, echoing the hound’s horrible song, their scrabble and howl.

She holds until she can taste the electricity of the closest one on her tongue. Until she can practically feel its metal and meat breath against her hand.

She lobs the detonation in the middle of them. Waits until she hears the tck-tck of the pre-explosion.

In the far-future Ninth World, claves of Aeon Priests help their community understand and use the mysterious technologies of the past. But what happens when one of these priests uses this knowledge and power to exploit the people who depend on them? In the region of Steremoss, a group of brave individuals are determined to resist this oppression from the shadows. They call themselves the Night Clave.

The Night Clave is an official novel set in the Numenera world, and is presented in this deluxe, limited hardcover edition.