Breathing Life into Your Encounter

The job every GM faces is to immerse the players in the make-believe world of your setting. You can do that in lots of different ways, but I want to focus on a few strategies for bringing a specific scene to life for your players, in Five Easy Steps.

When your player characters enter an encounter, don’t hide what’s important about the encounter behind less-important minutia. For example, if PCs exploring a ruined cathedral enter a chamber containing a two-headed wolf sleeping in the nave, lead with the wolf. Don’t start out describing the room’s dimensions and the number of windows. Those details can come afterward. 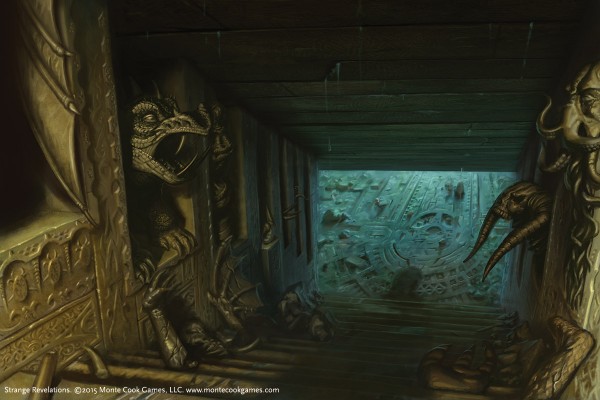 When you describe the focus of the encounter, imagine what you would see, feel, smell, and hear if you were present, and relay that to the players. To continue with the above example, describe the two-headed wolf’s coal-black fur, the jagged rumble of its snore, and the gag-inducing carrion stench in the nave. It’s easy to go overboard here, so provide at most three vivid terms and descriptions—players will paint the rest of the picture in their heads.

3. Fill in the Details

So you’ve told your PCs about the two-headed wolf? Good. Now sketch in a couple other details, if they’re important. If shattered stained glass is lying across tumbled, splinter pews, that’s not only atmospheric, it might also clue PCs in that the terrain itself could prove dangerous should a fight break out.

4. Hand the Ball to the Players

Don’t linger too long on setting up the scene once you’ve laid it out. Signal the PCs that you’ve finished your description, and that the ball is in their court. My favorite way of doing that is to simply ask, “What do you do?”

The players probably have questions about specifics. That’s great. Usually, it means you’ve engaged them enough with the scene that they care what’s happening.

If the encounter is likely to become a fight, this is the time to sketch out the area in a game where you’re not already using miniatures or simulated floor plans. I’d suggest only sketching a map if there is something wonky about the area that PCs would notice if they were actually there. If the fight is just in a big square room, then you might not need a sketch. On the other hand, if it would benefit the PCs to know where to find the windows, doors, and other exits (in case they need to run away), then sketch out the room on a pad of paper or dry-erase board.

If it’s not a fight—if it’s roleplaying encounter—your job is to bring the non-player characters (NPCs) to life by speaking for them. That’s an entirely different blog topic, but one that I’ll summarize here by saying—imagine a real person, and convey that real person to the PCs.