Building an Adventure around an Item

Your Game is a regular column that talks about getting the most out of your RPG experience, including GM and player advice.

Over the past couple of weeks we’ve been holding a sort of contest over on the MCG Facebook page. We called it Ten Days of Strange Cyphers (and Artifacts), and each day we featured a complete writeup of one cypher or artifact from the forthcoming Encyclopedia of Impossible Things. Each one was presented with an illustration and all game stats—completely useable in your game. The objective was for you to pick your favorite, which we would then feature in one of our official Gen Con adventures.

(Our thinly-veiled secret objective was to make everyone aware of Encyclopedia of Impossible Things and get a taste of the 650-plus cyphers and artifacts, original and mythological, that you can use in your game of The Strange–or really any Cypher System campaign. (And now you know about it, too—see what I did there?)) 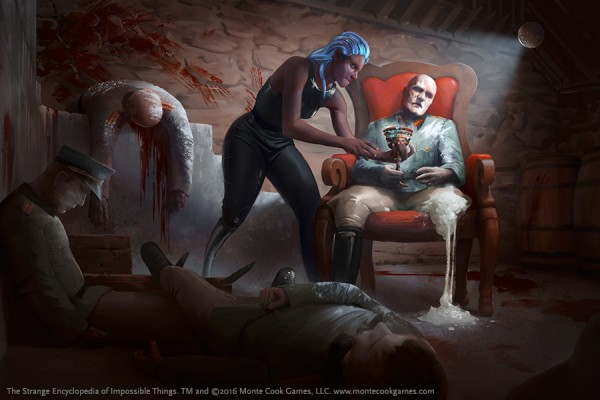 We featured the following items:

So, which one came out ahead? Reanimator and Spellbook of Thoth basically tied it, with each receiving the same number of upvotes (as measured by Facebook shares). As the authors of our Gen Con adventures, the creative team has tie-breaking rights, and Bruce decided to work the Spellbook of Thoth into one of our adventures. Congrats to Thoth, and all of you who upvoted his spellbook!

(If you’re keeping track at home, I’ll mention that the Holy Grail and Hand of Glory also performed admirably. And the Human Suit is worthy of an honorable mention, punching above its weight.) 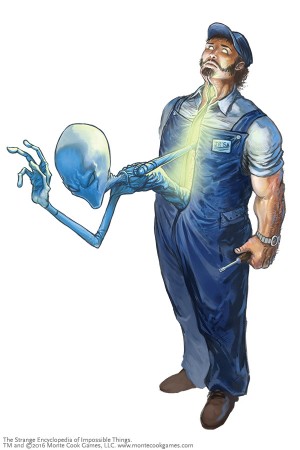 What do these ten items have in common (other than being featured in the Encyclopedia of Impossible Things)? Any one of them could make great centerpiece for a story in your campaign. The holy grail has certainly been the focus of many a tale, from Arthurian stories up through Dan Brown novels, with a quick stop at Indiana Jones along the way. But is it the item desirable enough to drive the motives and conflicts that make great stories? What factions or nefarious characters might be interested in getting their hands on a Halo of Mindreading? Who is trying to keep Moriarty from finding his missing cane—and why does he want it back so badly? What would your players do if they came into possession of a reanimator? Items like these make great MacGuffins—but unlike the Maltese Falcon, these MacGuffins have teeth!

Over the weeks to come, Bruce is getting to work on integrating the Spellbook of Thoth into our Gen Con adventures. The next time you’re looking for a little adventure inspiration, why not start by perusing cyphers, artifacts, and other interesting items. You never know what they’ll suggest!