Every hobby has a go-to guidebook. Definitive and broad in scope, it’s the thing that every seasoned veteran has, and it’s the book that every newcomer is encouraged to get. The one that comes to mind for me is Wonderbook by Jeff VanderMeer, a very comprehensive look at writing science fiction and fantasy.

I’ve always felt that roleplaying games needed a book like this. Particularly now. Because the hobby’s been around for 40 years and yet we’re still seeing a wonderful influx of new people.

There have been books about gaming. About gamemastering. About playing. I’ve worked on more than a few myself. What makes Your Best Game Ever different?

It’s a how-to book for all the things that we take for granted, but probably shouldn’t. How do you find a good game group? How does a GM create an adventure suited to the people around their table? What do you do with the problem childish player that’s diminishing everyone’s fun? What are some tips for when you’re hosting the game in your home? What about if you’re playing online? 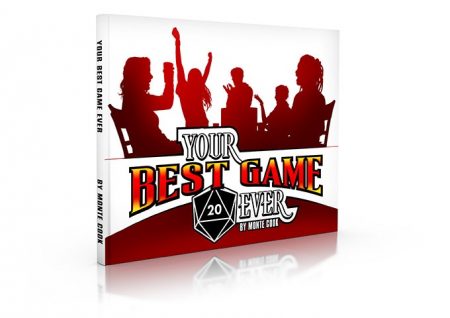 To give you an idea of what this book offers, let’s take a look at just one of those topics in more depth.

Let’s look at problem players. And in fact, let’s narrow in even more and look at one kind of problem player in specific: the player who’s always trying to run everyone else’s character.

You’ve likely seen it happen. It’s Sarah’s turn and Richard starts suggesting which spell she should cast or where her character should move. Or Keith states his character’s action but Richard interrupts and tells him what he should do instead. This kind of thing happens most often in tactical or action scenes. And it’s often the case that Richard is a more experienced player.

It can even go so far as when Sarah rolls for her action and Richard reads the die and announces the roll before she can. Maybe even having already added her die modifier for her.

Regardless of how it manifests, the situation is likely quite frustrating for Sarah and Keith. But if they say something, Richard just says that he’s trying to be helpful. And maybe in his mind, that’s true.

Like all such issues, this is a table problem, not a GM problem. So many times we rely on the GM to solve or arbitrate or police problems, but unless it directly involves GMing, that’s just not the case. That’s too much responsibility to give to just one person. Besides, in this scenario, the one offering the unsolicited suggestions might actually be the GM.

So many times we rely on the GM to solve or arbitrate or police problems, but unless it directly involves GMing, that’s just not the case.

So Sarah and Keith need to speak up. Not in anger, but in a calm, straightforward matter and to Richard, but probably with the whole group present. “Let me play my character when it’s my turn,” they should say. “I know you want to help, but I won’t get to know how to do this as well as you do if I don’t make my own decisions.”

But let’s look at it from Richard’s point of view for a moment. He loves the rules, most likely, and he’s showing enthusiasm for the game, even if it’s in an annoying way. He’s not entirely content just playing his own character. Sarah and Keith should agree that if they are stuck, or have rules questions, they’ll ask Richard. It might, in fact, be handy if Sarah can ask Richard to look up a spell description for her while she figures out what to do next. Even the GM can ask Richard to reference rules or do similar tasks that help them and the whole table. Maybe Richard should run the next game the group plays.

It’s worth one last note that this is not always a rules matter. Sometimes, it’s a matter of a character’s role or personality. “Well, you’re the warrior, so you probably just charge in,” Sarah might say to Keith. Or, “Your character’s dad was killed by a killer robot, so you hate this android.” It’s good to have developed a character who is so established, consistent, and believable that others can predict their actions, but actually deciding actions for you based on that knowledge is no different than telling you which mechanical option to use. It’s usually even more easily solved too.

Players who do this do so for two reasons: they are attempting to reinforce stereotypes and cliches (“you’re the mage, so you should stand in the back”) or are only showing their appreciation for a well-played character. The first can be countered with “I’m playing a different kind of character than what you’d expect.” The response to the second can be “Thanks, I’m glad you like my character, but let me narrate their actions—I might just surprise you.” In both cases, the response is intriguing, and most players will want to watch what happens so that they can know more.

Your Best Game Ever is going to deal with topics like this and a lot more. This isn’t an excerpt from the book (it’s still in development) but it gives you an idea of a philosophical approach. In part 2 of this article, I’m going to pick a very different topic to explore with depth: playing a tabletop game online.

P.S. Please take a moment to retweet about the Kickstarter or share the news on your favorite gaming forum or Discord. I just know there are so many people out there who want Your Best Game Ever but don’t know about it yet!