Inside The Stars Are Fire

Curious to know more about what The Stars Are Fire will contain? Read on!

We’re really excited about this 160-page book of sci-fi goodness that will cover running and playing in science fiction RPGs. Broadly speaking, The Stars Are Fire will provide rules and stats for aliens, robots, starships, high-tech gear, otherworldly hazards, and much more. It will also include an entire campaign setting built using the guidelines in Your Best Game Ever.

We’re really interested in steering the new setting more toward the hard sci-fi end of things, but with a sprinkling of more fantastical tidbits in the mix to keep your players on their toes. Our setting is not too far in the future, where humanity has reached out into the Solar System: a supermassive O’Neill colony, with bases on the Moon, Mars, colonies in hollowed-out asteroids, huge bases on the moons of Jupiter and Saturn, floating cities hanging in the clouds of Venus, and more. Even more amazing, multi-planetary corporations—like Xiao-Keller (XK) and Astra Industries—make colossal investments into a brand-new domain of physics, producing a top-secret propulsion system allowing humans to found nearby interstellar colonies.

A supermassive O’Neill colony, with bases on the Moon, Mars, colonies in hollowed-out asteroids, huge bases on the moons of Jupiter and Saturn, floating cities hanging in the clouds of Venus, and more.

That’s when the Moon colonies discover millions of miles of tunnels crisscrossing the Moon’s core beneath the regolith. Artificial tunnels. OLD tunnels. But the news never reaches Earth. The discovery of the tunnels coincides with the Earth going completely dark and quiet. No one in the solar system knows why…

But before we take that any further, I have a couple questions that we’re still exploring, and I’m interested in your take.

The first question I’m curious about is how hard you like your sci-fi? Hard sci-fi usually means an emphasis on scientific accuracy and engineering, or at least a very strong nod to it.

For instance, on the hard end of the sci-fi realistic spectrum, humans are stuck traveling at speeds no greater than the classic rocket equation allows. So even moving between planets in our own solar system would take months or years, even with really advanced plasma engines.

On the fantastical end of the sci-fi spectrum, humans might move by beaming themselves instantaneously around the solar system, or step through wormhole gates to find themselves in another solar system. Of course, there’s a lot of room for interpretation in the middle. Can it still be hard science fiction if it’s pre-supposed that all the matter in the solar system has been converted into a habitable ring around the star with a radius roughly equal to the distance that the Earth orbits the sun? Maybe, if all the underlying math is at least plausible. 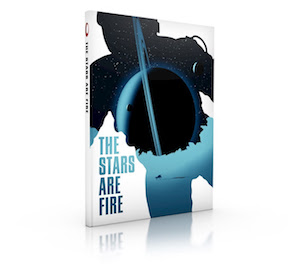 I happen to think good sci-fi should also contain soft elements. Lots of people say that soft sci-fi is the opposite of hard sci-fi, because soft sci-fi focuses on character and weird societies rather than science and engineering. I don’t know, to me, the amount of focus given to character development in a speculative society sounds like its own entirely different spectrum.

Or maybe all this talk of spectrums is the wrong way to go. I mean, why not create a setting that contains speculative societies of the future using hard science fiction-derived technology, but with the opportunity to develop or find technology far in advance of their own understanding?

It could be a thing. What’s your take? Weigh in on the Kickstarter Update.

My second question has to do with the percentage of rules/advice to new setting material that will appear in The Stars Are Fire. This book is going to contain tools you can use to craft all kinds of different sci-fi settings as well as a fully realized sci-fi setting. It’s a bit too early to nail down that exact ratio right now, but it’s something worth considering. And in fact, it’s a question I posed in the comments section of Your Best Game Ever a few days ago. And many of you already responded!

Whatever the specific ratio turns out to be, we’re committed to producing a meaty section for both. This will satisfy your needs for more tools and serve as an astonishing setting from which you can immediately launch a Cypher System sci-fi adventure or two.

So, will you come with us out into the void, which isn’t as lonely as they say? Because out there, the stars are fire.

Tell us what you think in the comments!

The I WANT IT ALL! level keeps getting better over the course of this Kickstarter. So far, it has grown by a deluxe edition of Your Best Game Ever, The Stars Are Fire, and Stay Alive!, a tool book and campaign setting for horror. What might we unlock next? 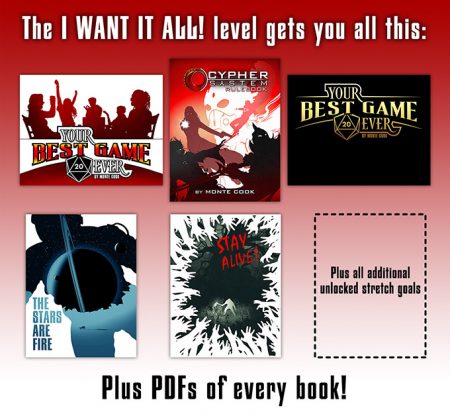 This entry was posted in Articles & News,Your Best Game Ever. Bookmark the permalink.