Designing a Game for the Whole Family 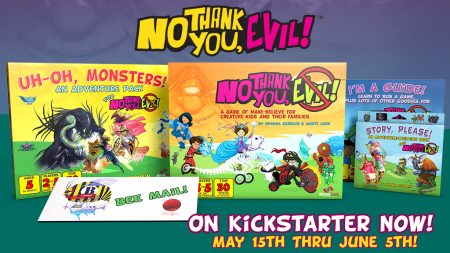 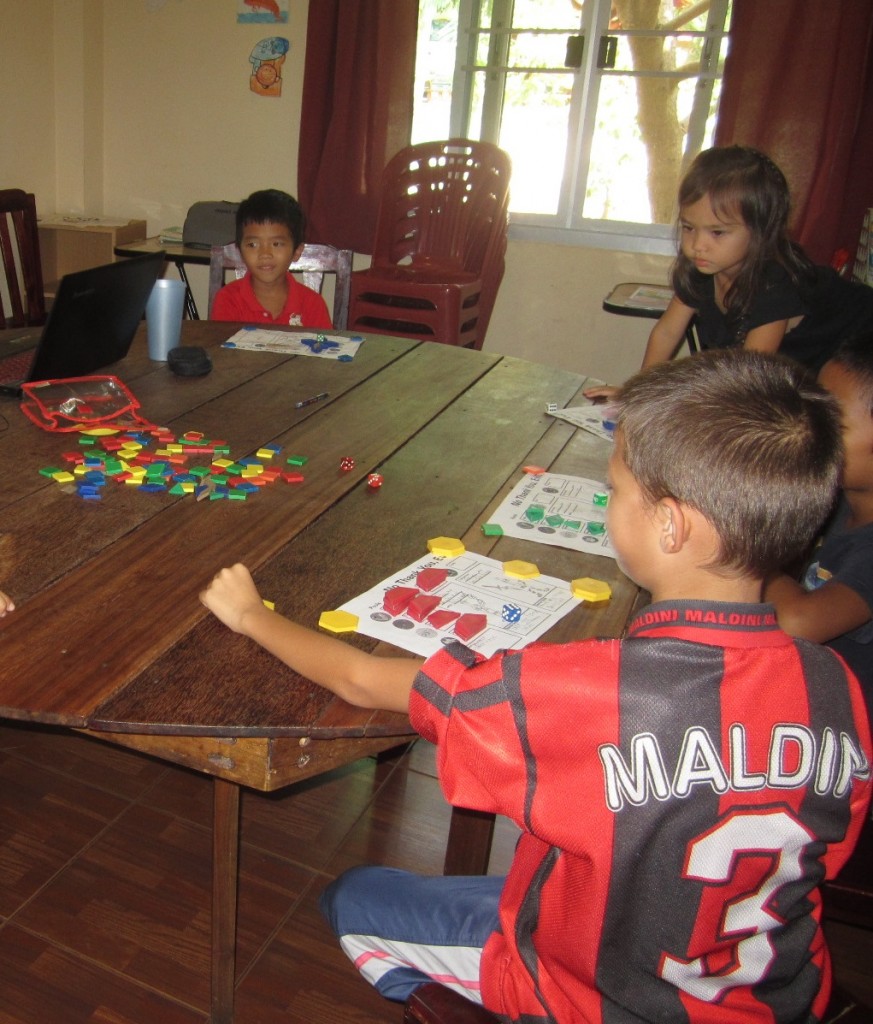 When we set out to make a roleplaying game for families, we knew we had our work cut out for us. Making a game for a specific age group — this game is for 5 to 7-year-olds! this game is for 8 to 10-year-olds! — seemed doable. But making a game that actually worked for real-world families, most of which had a variety of ages and experience levels? That seemed daunting. Could we make something that was fun for adults, challenging and exciting for pre-teens, and simple and engaging for players as young as 5? All of whom would want to play at the same time?

That was one of our biggest challenges of designing No Thank You, Evil! And it’s something that made playtesting so important and invaluable. What happens when you gather two 5-year-olds, an 8-year-old, an 11-year-old, and an adult around the table and send them off on an adventure? Who gets bored? Who gets confused? How do we fix those things? We got lots and lots of great answers. We’ll be continuing to playtest for a few more months, tweaking things as we get more feedback, but for the most part, we’ve nailed down a system that is flexible enough to accommodate a wide variety of ages and experience levels.

The basic rules are the same for all players. This makes it easy for adults or older kids to run the game, because they only have to know a single set of rules and it never changes.

What does change in complexity, depending on the player’s level and experience, is character creation. We used the make-a-sentence character creation style of the Cypher System, and broke it out into three levels:

At this level, the players end up with a complete, but simple, sentence for their character. I’m a princess. I’m a robot. I’m a superhero.

This is the easiest, fastest level. It’s designed for games with very young children (we’ve had players as young as 4 grasp this quickly) and for players and Guides (the person who runs the game) with little or no roleplaying experience. The simplicity allows everyone to learn the rules quickly while still having a great time. It also makes character creation fast and easy, so it doesn’t hold up the gameplay.

At this level, players also have a companion, a friend who travels with them. This might be a robot dog, a fiery dragon, or a dust bunny. The companion is there purely for the fun of it, so they can bring their favorite stuffed bunny or action figure to the table with having to worry about additional rules.

This is the middle level. It’s designed for games with middle-age children (6-10, depending on their roleplaying experience and skillsets) and semi-experienced families and Guides. At this level, the character creation sentence has two parts: I’m a Smart princess. I’m a Strong robot. I’m a Speedy superhero.

In addition, companions now have Tricks, special skills they can use to help the players. So if your companion is a fiery dragon, it can now blow a ring of fire that does damage to bad guys.

This level is for older players and families with roleplay experience. Here, the sentence adds a final element, the verb: I’m a Smart princess who Loves Ooey Gooey Things. I’m a Strong robot who Flies Through the Sky. I’m a Speedy superhero who Eats Ice Cream. The verb gives characters a new skill. For example, if a character Eats Ice Cream, they can take a bite of their ice cream and give their foe a brain freeze, making them stagger around moaning and holding their head.

At this level, companions also get cyphers! These one-use skills allow a companion to do something wild and fun, like blow bubbles at a foe, tell a joke to restore points, or step in and save the character during a fight.

There is also a fourth level, which is when an older, more experienced player is ready to take the reins and run the game for everyone else. This level is really designed for 12-15 year olds, but in our playtests we had players as young as 11 successfully run games for their parents and siblings. 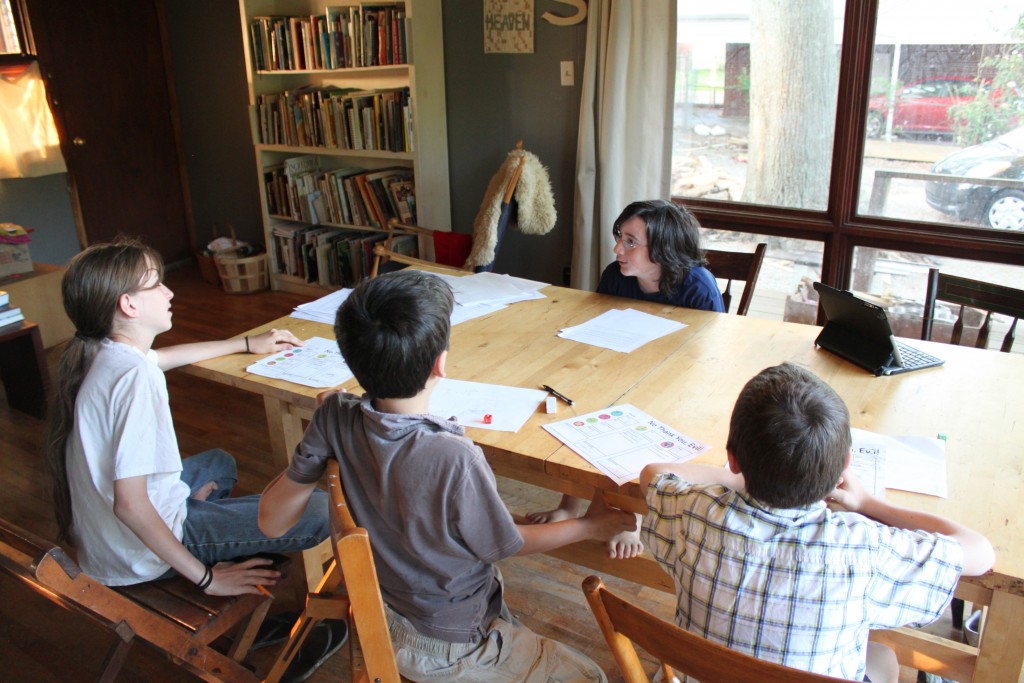 Putting it Into Play

But what if you’re running a game for a whole lot of different ages? One option would be to give each player the level that suits their age and needs. The trick there is that if the 12-year-old player gets the complex sentence, the 5-year-old is going to want it too. So we asked our playtesters to try that out: What happens if you pick the highest level that’s appropriate for the group, and ask all of the players to play at that level? Not surprisingly, the young players rose to the occasion. Rather than feeling confused or overwhelmed, they felt proud and excited to be playing at the same level as their older siblings. And we found that older players wanted to help the younger players “get” it.

We’ve done a lot of other things in the rules to ensure that everyone in the family can play, and most of it comes down to providing options for different skills and interests.

Reading, Writing, and Math: Players can use tokens to keep track of points or they can write it down. Math is simple addition or subtraction, made easier with tokens and more complex without. This allows players who struggle with reading and writing to play, while giving advanced players more of a challenge.

Conflict Resolution: Players can choose to fight their way through situations or find other solutions for dealing with conflict. Some players love action-oriented solutions, while some players (and parents) prefer peaceful solutions. Players are rewarded for finding creative solutions of all kinds.

Verbal Skills: Characters have the option to act out their characters’ actions rather than explain them verbally. This is an especially important option for children who struggle with social uses of language (many children on the autism spectrum struggle with this).

We’ve also taken dexterity, color-blindness, dyslexia, and other physical and cognitive concerns into account. (You can see more about that here: Designing for Accessibility.)

Making a game for families might be one of the hardest projects we’ve ever tackled. But it’s also been one of the most rewarding. There’s nothing more awesome than watching families gather around the table and game together, and we are proud to be a part of that! 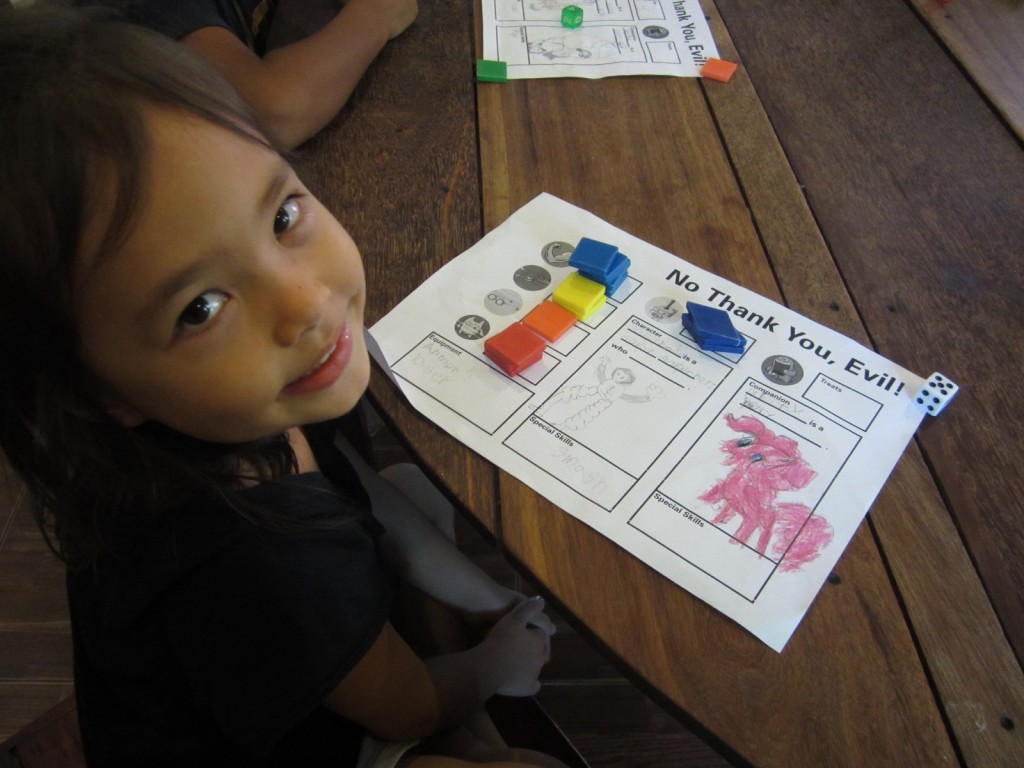