At Gen Con 2016, the team at Monte Cook Games won ENnie Awards for Best Production Values (for the Numenera Boxed Set) as well as Best Family Game (for No Thank You, Evil!) We’re quite proud of those products and awards, but they mean something even more special to me. In many ways, they represent the culmination of years of hard work. 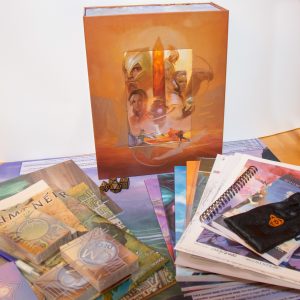 Which is strange, because in some ways, it’s also just the beginning.

Back in the 80s—in my high school and early college days—desktop computing became a thing. Computers weren’t new, certainly, but this was the beginning of that slide to everyone having one. This is also where industry after industry was turned upside down due to their use and sudden ubiquity. The graphics and publishing world was not immune.

I had gained some experience with print work before computers working for my mom—she had a publishing company that created books on sewing and quilting crafts. She did the layout on board, type work with sheets of rub-on letters, sent the work off to pre-press pros to create halftone screens and film plates. To describe the process as tedious would be too kind.

QuarkXPress changed all of that. Back in the day, Quark was the premiere graphic design and layout program, bringing with it a sense that you could do anything with it—and do it quickly. It also made me think I could design game books—books that were beautiful, ornate, and something special to experience long before someone sat down to actually read it (while ultimately the words are the heart of any game book, you rarely flip through words—you flip though pages, absorbing the spirit of the book through the design and art). This, I felt, was a way in which I could make my mark in the world.

But I didn’t. Not then, anyway.

I remained heavily into computers and graphics, and worked as a graphics professional since leaving college (doing design, interactive work, illustration, animation, video, and more, all under the umbrella of ‘graphic design’). While I worked for a variety of industries, the idea of delving into gaming, let alone on tabletop RPGs, remained an unrealized goal for many years.

Of course during that same time, the gaming world evolved, turning out ever more beautiful books. What I had dreamed of bringing to the world was already being done—very well, and quite successfully.

Two years ago, I was fortunate enough to join MCG as art director. By the time I had come on board, Numenera had been out for a year and The Strange was just about to be released. The position came pre-loaded as award-winning before I even had a chance to touch a thing. It would have been easy to coast, to consider the accolades my own, but…

I still wanted to make my own mark by creating something special. When we started planning the Numenera Boxed Set, I knew this was that opportunity. Having a wonderfully successful Kickstarter allowed us to throw everything we could at it, taking nothing for granted. While we strived for consistency with the Numenera corebook, everything went through the lens of “what could be improved?” And of course the box itself received a significant amount of effort—to make it something inviting to open as well as something beautiful to place on a shelf.

Winning the Best Production Values ENnie Award vindicates those efforts, and could easily satisfy past-Bear’s desire to make something special.

But as I said, this is just the beginning.

A couple of weeks ago we completed our seventh—and most successful—Kickstarter campaign: Invisible Sun. Where the Numenera Box Set ended is merely the starting point for what we’ll be doing with Invisible Sun. At its heart, this product is a big, beautiful, ominous box full of stuff—deluxe, luscious items that, hopefully, you’ll want to open and hold again and again. Its physicality should be an experience, both unto itself as well as in support of the game. I believe it will be.

This is what I wish to bring to the table each and every time—something special. Not every product will be a Numenera Boxed Set (or an Invisible Sun), but everything we put out should be the best version of itself that it can possibly be.

I use the word “I” above quite a bit. Everything we do at MCG is a team effort. However, I find it easier to talk for myself than others, and I wanted to focus on past goals, my own personal journey, and what I bring to the team.

Bear Weiter has worked in the design and graphics world for 20 years, on production work, graphic design, interactive design and development, illustration, animation, book production, and beyond. He is the Art Director at Monte Cook Games, where he’s responsible for the art and layout of our books, the look of our brands, and our relationships with the artists who make us look so good.