Gods once walked the world. From their mystical realm of Elanehtar, they brought plenty and pestilence. They judged the living and the dead. They ruled all.

Then Elanehtar fell to earth like a vengeful star, sparking cataclysm and plunging the world into a dark age. The gods are gone, but their works remain—scattered and broken. As does their lingering divine spark . . . 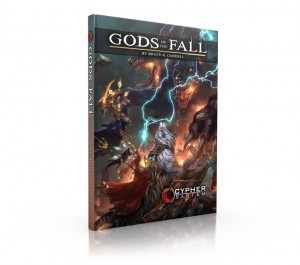 Have you ever wanted to play a god? Gods of the Fall is a fantasy RPG where player characters awaken a divine spark after the old gods have died. They claim dominions and call themselves gods of War, of Secrets, of Winter, of Fables, or whatever they want. They complete divine labors, fulfill prophecies, and eventually maybe even redeem a world fallen into evil.

Now, you can do more than just play Gods of the Fall. You can share what you’ve created with everyone! We’ve added Gods of The Fall as our first open setting for use with the Cypher System Creator program offered by Monte Cook Games. You can use this program to publish Gods of the Fall adventures, character options such as descriptors and foci, cyphers and other items, creatures and NPCs, and more.

The Cypher System Creator program at DriveThruRPG lets Cypher System fans and third-party publishers release products, large or small, for the Cypher System in general, and now, for Gods of The Fall in particular. Go check it now!