As the newest MCG hire, I think Monte is pretty flippin’ rad. His games hooked me into tabletop gaming in the first place, transformed me into a gamemaster with Numenera, and now I get to work for this team that I’ve admired from afar. While I tried to play it cool when I first joined, I can’t hide it: it’s an absolute dream. These people are even kinder, more hardworking, and lovely to work with than I could have realized from the outside, and Monte chief among them.

Monte reaches out personally when something is going on in one of our lives, honestly values each of our opinions, and has endless patience and only empathy when a certain new hire makes mistakes. He cares deeply about what our company and our games do for people, and is constantly dreaming up new ways that we might improve and innovate. (On the other hand, Monte introduced me to progressive rock, for which I don’t know whether to thank or curse him since there’s practically enough Rush and Yes alone to keep me occupied for the rest of my life. I suppose he’s only human.)

I have never met someone as driven as Monte to do right by both his audience and his team. He shoulders that balancing act gracefully, so when Shanna concocted a plan to surprise Monte with a celebration, we all jumped at the opportunity.

The #HappyBirthdayMonte celebration this past weekend brought people all around the world together to play games and adventures that Monte worked on in honor of his 50th birthday and marking 30 years in game design. We were even able to keep it a secret from him until just last week!

Monte was surprised and grateful, and even those of us in the know were taken aback at the breadth of games being played, and the wonderful pictures and creative events people put together. We’re sharing just a few great posts here, but we encourage you to check out the hashtag #HappyBirthdayMonte across social media for yourself.

Leslie Wilson simply blew us away with a session of her three-year Ptolus campaign, featuring an incredible sculpt of Mrathrach’s Machine:

Still running my 3 year Ptolus campaign! I am beyond grateful for all Monte Cook has created for the RPG world, then and now. Thank you and #HappyBirthdayMonte @MonteCookGames pic.twitter.com/uvFdphO3vZ

Celebrating both New Gamemaster Month AND Monte’s birthday, one group in the UK played Ravendesk Games’ Vurt, which uses the Cypher System, and they streamed it on Twitch! Watch the YouTube recording, and tune into Part 2 on Monday February 5th at 8PM GMT on their Twitch channel. 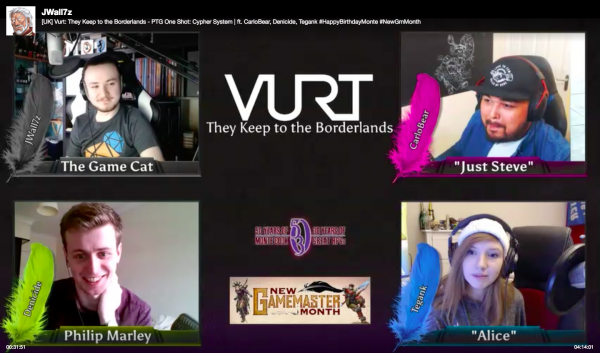 It was delightful to see tweets rolling in from all over the world, like Australia (James Fellows is an Asset Team member!), Spain, and Canada: 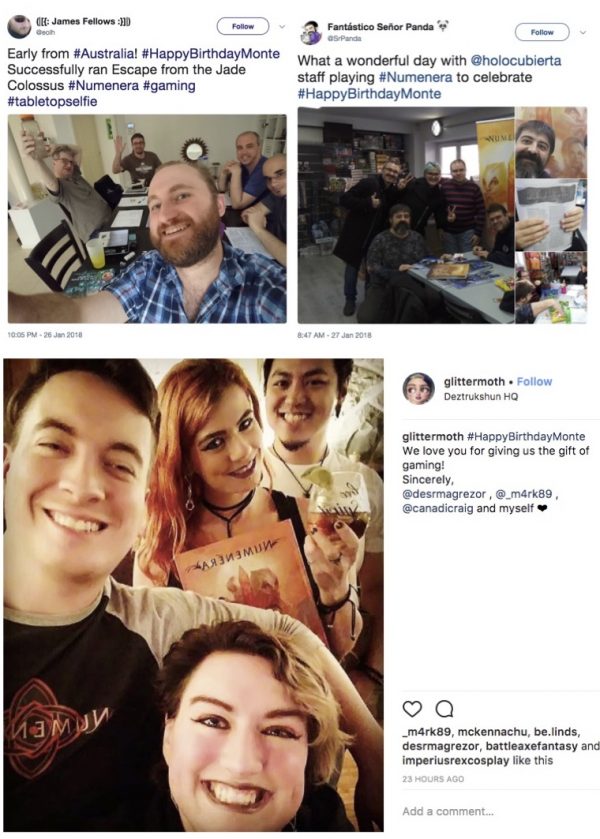 It’s been touching for all of us at MCG to see all of this enthusiasm and kind words from the gaming community. Once Monte recovered from the shock of the surprise, he put it best:

Thank you all so much for all the #HappyBirthdayMonte tweets over the weekend.

I literally cannot imagine a better gift than seeing people around the world playing games and having fun.

P.S. There was an Invisible Sun cake to celebrate in person! Unfortunately we’re not allowed to share the surreal, Dark secrets that the Black Cake-Cube revealed to us.