Invisible Sun Design Diary 11: The Rule That Almost Was

A week or so ago, I put the finishing touches on the Invisible Sun Rules Primer. This is something that will help people understand the basics of the rules even before the game comes out, and will be available to people who backed the Kickstarter or who preorder the game now.

As I was pulling together the explanatory rules material that would go in the primer, I found something in the text of the game that I realized would be a problem. Now, before I get to that, remember that Invisible Sun uses a 10-sided die roll to handle action resolution. The die is numbered 0 (low) to 9 (high) rather than a 0 meaning “10.” (And you can modify your outcome in various ways, or use magic to roll multiple dice—the latter being particularly important because sometimes you need multiple successes to overcome magic—but that’s not the point here). The problem was that the rules said that 0 was always a failure. 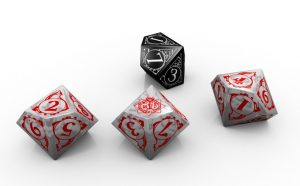 It’s a tricky problem, though, because it’s a technically true statement. See, if you’re rolling a die at all, it means that after modifiers and whatnot are taken into account, you have a target number of at least 1 on the die. Because if the number you need to roll is a 0 or less, you wouldn’t need to roll at all (what would be the point?). So what’s the problem? The problem is, sometimes you’re rolling multiple dice and looking for just one success. I might be trying to disguise myself as a waiter at a prestigious restaurant, but since I’m using a magical mask that helps me, the magic grants me an extra die in addition to the standard task die. One magic die, and one mundane die to perform a mundane task. So if the GM says that the challenge to fool the head waiter is a 4, I just need to roll a 4 on one of the two dice.

But what if I roll a 7 (success!) on the magic die and a 0 on the mundane die? Well, if the rules said “0 is always a failure,” it might lead the reader to believe that the 0 somehow trumps the success. And that isn’t the way it needs to work. Success trumps failure. There isn’t something special about a 0. It doesn’t trigger some kind of crit fail or anything of the kind. The original rule wasn’t about that—it was just stating a logical fact true when you’re only rolling one die.

Obviously, that sentence needed to go. It would only cause confusion. And thankfully we were able to change it even though the rulebooks had already gone to the printer. It’s funny how often things like that happen, where you catch something important just as the manuscript is leaving your hands. It’s never finished until it’s literally back in your hands, in its final printed form.

(As an aside, if the rolls were reversed, and it was a 7 on the mundane die and a 0 on the magic die, the 0 would trigger a special event called “magical flux” that would result in some minor weirdness, like milk spoiling or someone’s sock turning a different color, but I’d still succeed on the disguise action because I rolled a 7. Even if I somehow was adding three extra magic dice, and all three magic dice came up 0s, I would still succeed. The resulting magical flux would probably conjure a horde of vengeful ghosts that would haunt the restaurant for years afterward, turning all the rooms inside out and making all the patrons exchange names with the person on their left, but I’d still fool the head waiter with my disguise.)

For a limited time, Invisible Sun is available for pre-order!