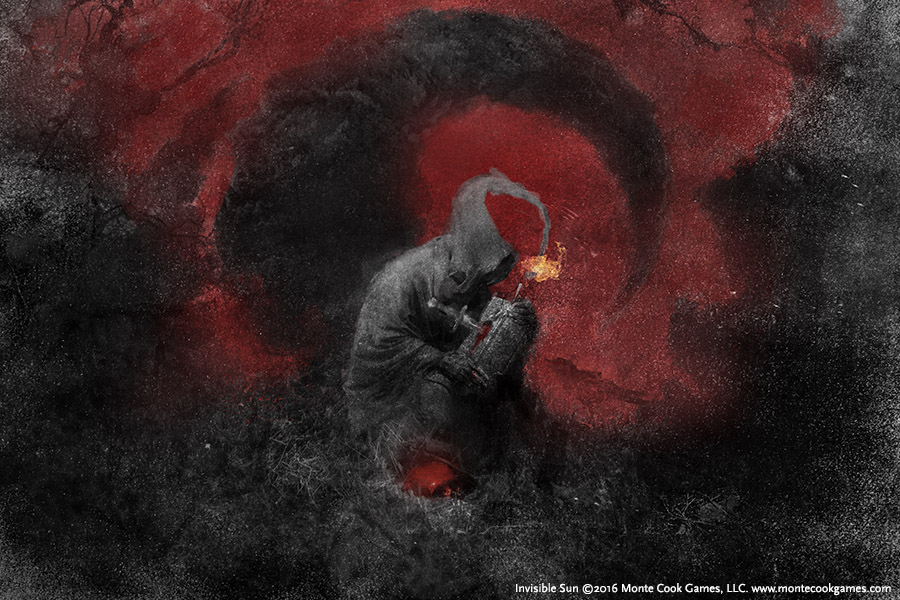 And that’s fine. It makes perfect sense—it’s a game, and games need rules and rules require some kind of quantification. Many spells in Invisible Sun work the same way. You spend a specific amount of Sorcery and you get a specific effect. That effect is probably stranger than those found in most RPGs, but the set up is the same. Other spells are intentionally more open ended or less straightforward in their application, but they’re still a mechanical element rather than a roleplaying experience. To put it bluntly, a spell that binds your foe in magical bonds made of giant worms doesn’t create an encounter, it ends one.

Thinking about this, I realized I wanted more of the “story-based” magic that you get from fiction or occult tomes. Things that, on the page, don’t seem automatically or universally applicable, but in the throes of a story-based game actually prove to be exactly what you need. This is where “long form magic” comes in.

Long form magic are invocations, enchantments, and rituals that take a long time to perform and have requirements (non-trivial ingredients, specific tools, multiple casters, etc.). You don’t use them in an encounter. Their effects are often open-ended and contextual. For example, there’s an invocation called Beseech in which you attempt to contact a higher power and ask for… something. If the being you name in the invocation hears and is interested, it starts an encounter with that being. This might be a conversation, a negotiation, a plea… it depends on the situation. In the course of my playtest campaign, the PCs threw a party to give themselves an opportunity to inquire with some high society people regarding information they needed. Uninvited, a clearly powerful being named The Eldest mysteriously showed up at the party, hung around a bit, and said some cryptic things. Only later did one of the PCs realize that they had an opportunity to ask this being for a favor but didn’t take it. They saw the Beseech invocation as a way to open up a line of communication with the Eldest again. Would he hear them? Would he care? They didn’t know, but it was a way for them to take control of the narrative a bit and use magic create an encounter because they wanted to have it.

Because sometimes an invocation or ritual is the kind of thing that you’ll only use rarely (maybe just once), rather than spending acumen (XP) to learn it forever, you have the option of obtaining a monograph. The monograph is a book—basically, it’s a specific long form magical working in written form. You read it all out step by step and do what it tells you to do and thus perform the magic. If you’re going to use it more than once, though, you’re much better off spending the points to add it to your repertoire. Still, monographs are a fun way to present PCs with a sort of tool that can either be used whenever they want or in the course of a specific undertaking. For example, the PCs infiltrate a what they think is a temple to an obscure god but actually is a prison for a powerful spirit. The “cultists” are actually captors who use the captive spirit’s knowledge for their own end. The PCs decide to free the spirit, get to the heart of this place, and need to communicate with the spirit to find out how they can help. But how do they communicate with it? Well, the captors have a ritual they use—and so of course they have a monograph detailing it. The PCs then have the exact tool they need at that moment (if they choose to use it) without them needing to spend points and time to learn it.

There are many kinds of magic in Invisible Sun, and each serves different needs. Long form magic makes magic very open-ended (and thus, more magical) and it puts power in the hands of the PCs to use magic not only to react to encounters but to create them.