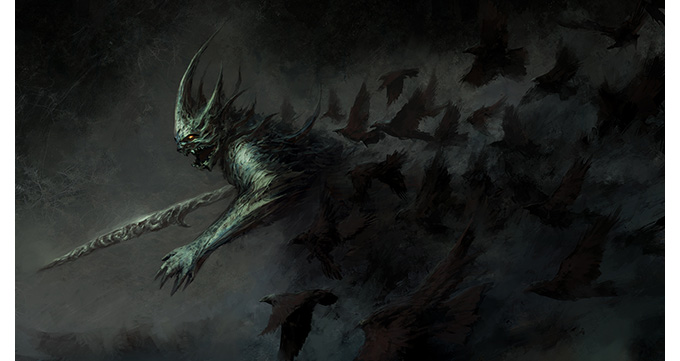 I’ve always known that in the world of Invisible Sun—the Actuality—death is not what we think it to be here in Shadow. Death is just a transition to another state. For most people, that means moving to the realm of the Pale Sun, known sometimes as the Deadlands. For others, death means that they become ghosts that still dwell among the living.

But what I haven’t always known is exactly how this works. I want dead PCs to be playable, but they need to be different than living PCs. Being dead should be inconvenient and unpleasant enough that you probably don’t want to remain that way for too long, but even then, it still should be fun. (And there are plenty of ways to come back.)

It took a lot of time and thought to pull it all together. I wanted to take all the “lore” that we’re familiar with—ghosts can move through matter, are sometimes seen but often invisible, cause cold spots, can learn to affect solid objects, can possess people, and so on—and quantify it enough to make it gameable without taking all the mystery and magic away from it by layering on a lot of rules. It needed to work for PCs, but also make sense for NPCs. I wanted GMs to be free to make NPC ghosts do all the stuff we’re used to seeing in books and movies.

Sometimes I use the phrase “complex but not complicated” to discuss a game design topic that has a lot to it but that isn’t hard to understand. That was my goal with ghosts, particularly PC ghosts. Basically, there are five stages of ghosts. Once a dead being goes through what is called “The Empty” (a period of nothingness right after death that can last anywhere from a few moments to weeks), it’s determined whether they transition to the Pale or remain as a ghost. Vislae PCs always have the choice to do whichever they want. The new ghost is probably just a residual bit of consciousness—a free floating soul, or a sentient qualia. After some time, they move to a stage where they are an apparition. An apparition can be seen and heard if it wishes. The next stage is the poltergeist stage where the ghost can begin to affect the physical world. Then comes the haunting spirit stage where the ghost can tie itself to an object (and even animate it—including a corpse) or possess the living. The last stage is the phantom stage, where a ghost can manifest a body for itself out of ectoplasm and move about and interact with the world, indistinguishable from a living being (at least for a short while).

A typical ghost may take years to advance through the stages, but vislae can use a special skill and learn secrets that allow them to move much faster. What’s more, these abilities remain, so that a character dies, advances as a ghost, is brought back to life but then dies again they immediately return to the stage they were at before. So you’re much better at being a ghost the second time around (a concept that probably only makes sense in a magic-heavy setting like this one).

In gameplay, this means that if a character dies (and the game can be quite deadly, although it’s not particularly combat-focused), if they take some time and spend some Acumen (one type of experience point), they can enjoy this new state for a while. They’ll make a fantastic spy. But it’s hard to affect the physical world, and that limitation likely will get to be a drawback long term. So they’ll want to get a spell or ritual that allows them to return to life. But it’s conceivable that dying to gain ghostly abilities for a while might actually be a strategy for some characters, particularly if they put some contingencies in place to ensure they get to come back. There are lasting psychic scars, though, so it’s not something you’ll want to do more than a few times at most.

It’s also conceivable that a player looking for a very different play experience will decide to be a ghost long-term. It would be difficult for such a character to accomplish much on their own, but as a part of a group, it’s an interesting and off-beat option, making them really good in some situations, and really bad in others.

And yes, while this all makes death less a threat, there are still plenty of real threats in the game. There are ways to die from which you cannot return. There are ways to “die” if you’re already dead, and they’re particularly unpleasant. And of course, most of all, there are many, many fates far worse than death. My goal here isn’t to make PCs immortal or free from consequence. My goal is to shake things up and grant a different play experience. To use an only somewhat relevant phase, in Invisible Sun, death is a feature, not a bug. Death isn’t an on/off toggle that says, yes or no to the question of whether or not you can keep playing the game. It’s not the end of your story, it’s just a new chapter. In italics. And a different font.

And it’s the stages of ghosts that are the framework upon which all the other elements hang. This includes spells and secrets that make being a ghost easier, spells and rituals that return the dead to life, creatures that PCs will encounter, and so on. It allows different rules, like the various stats, how characters sustain and deal damage, and various magical effects, just to name a few, to easily and intuitively change based on whether the PCs is a ghost or not without rewriting the whole thing each time. But most importantly, it hopefully makes for a fun and interesting play experience, different from playing a living character.

I will leave you with a few other random thoughts about ghosts in Invisible Sun: