Monte Says: Adding Technology to the Ninth World Can Be Tricky (But Fun)

In the Numenera Corebook, I describe the people of the Ninth World as having a “Medieval” society. That’s about right for the technology level, but I’ll tell you a secret—the society is really closer to the ancient Middle East, a la Babylon, Ur, Assyria, and so on. (There’s little or no feudalism in the Steadfast, for example). I relied on the “Medieval” terminology for two reasons. First, the native technological level is closer to the Middle Ages than to ancient times. They have fairly sophisticated armor and crossbows, for example. Second, and more importantly, it’s a time period most people can understand, or at least think they can. They’ll think about the Lord of the Rings movies, or a D&D game, or some other pseudo-Medieval expression, and they’ll feel at least somewhat comfortable. And making people comfortable with the Ninth World is a challenge, because it’s such a weird place.

There’s nothing intentionally overtly European about any of the locales detailed in the Ninth World. That puts it farther from the LotR or D&D references I just mentioned. It’s not really supposed to feel historical at all. It’s its own place. Regardless of whether the comparison is ancient Babylon or Medieval England, however, the comparison is imperfect. In neither place could you come into a town and find someone to help fix your laser rifle, or barter a few odds and ends to get some strength-enhancing pharmaceuticals. But in the Ninth World, you can expect to do either of those things. Although you’d never use those words. 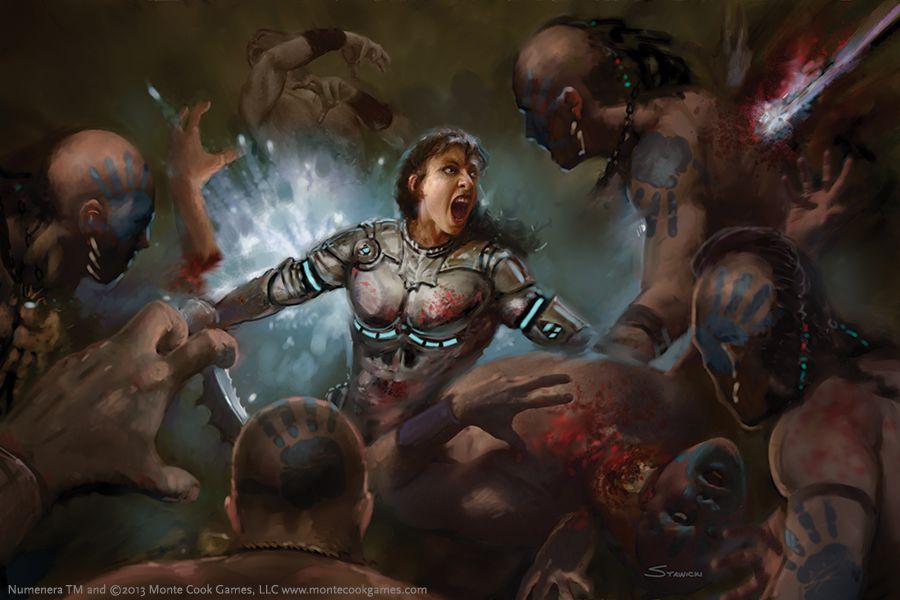 More than anything, the Ninth World is a post-apocalyptic setting. And the key to that is that there are limited resources of gear, devices, weapons, and so on that can’t be easily produced. A post-apocalyptic setting is one full of stuff that really doesn’t belong. And that’s the crux of it. It’s a world of technology, but the technology doesn’t really fit the world. Or, perhaps more accurately, the world (the current culture) doesn’t fit the technology. The technology present in the setting is alien to the people who live there (figuratively, but sometimes literally), even though it belongs to the setting. In a way, it’s the people that don’t really belong.

This means that when you’re going to create something for Numenera—whether you’re a game designer or a GM—you start with technology. You read about some incredibly advanced scientific concept, like smart fluid. Liquid with properties (like viscosity) that can be altered in an energy field. You take that cutting-edge concept and you advance it as far as your imagination will allow it to go. Liquid that can change color, shape, solidity, texture, temperature, conductivity, and so on. You make it a part of a technology for a society where such thing would have been commonplace. So smart fluid armor. Or tools. Or vehicles. Computers using fluid circuits. And so on. Nifty.

But once you’ve finished your research, and your extrapolation, you’re still not done. In fact, the hardest part is yet to come. Because you can’t just tell your players that they’ve found a device that creates a field which causes fluid to take on specific, preprogrammed shapes and forms any more than you’d tell them they found a smart phone or a gun. That’s just not very Numenera. You’ve got to look at the technology from the skewed perspective of the Ninth World. Within that lens, you’ve got people who think it’s all spirits and gods and magic. (And who can blame them?) Even those who are able look beyond that veneer don’t truly understand energy fields, viscosity, processing power, programming, and so on. So you don’t describe it that way at all. It’s just a container of liquid that can produce some weird stuff, some of which is quite useful. You, as the game designer or GM, understand the basics of the cause, but you describe it in the world only based on its effect. Let me say that again. You don’t describe something by the cause—how it works—only by the effect—what it does.

But there’s one more aspect to all this as well. Comprehensibility. The prior worlds aren’t just incomprehensible to the Ninth Worlders, they’re incomprehensible to us, here in the 21st Century. These civilizations were tens—or perhaps hundreds—of thousands of years beyond where we are today. We can’t understand the things they created (or why) any more than a cro-magnon could understand Minecraft. (Think about that for a minute. The cro-magnon could barely understand the construction that’s being represented in the game if it was in the real world, let alone the idea of doing it on a video game, interpreting what’s going on via a screen and influencing it with buttons.)

What this means in Numenera is that while some of the stuff just shouldn’t make sense to the characters, it also shouldn’t make sense to the players. That smart fluid artifact might be able to make something that just spins and moans and flashes colors rather than making some protective armor or a weapon. What’s it for? Who knows? Not us. We literally can’t understand it. It’s just weird. But you know what? Some enterprising player at the table is going to come up with a use for it. And that’s a big part of Numenera’s fun too. Because once you’re past the “okay, that’s pretty weird,” phase, you move on to “so how can I make use of this?” phase. Maybe it will distract a crowd of people so the other PCs can slip away unseen. Or perhaps the GM can step in later and use its incomprehensibility for something else. Maybe the sounds it makes means something to an automaton that’s been trapped in an ancient ruin for a few hundred million years, and that starts a whole new adventure. That might have never been the idea to begin with, but that’s the value of the inexplicable. It can always mean something later if you need it to.

So let your imagination go wild, perhaps with some research to get the creative juices flowing. Describe your creation to the players as well as the characters by what it appears to do, not what makes it work. Remember that the use it may have in the characters’ hands might not be the purpose for which it was created. Maybe not even close. The original purpose might be incomprehensible, but it’ll work as a weird sort of bomb now if we throw it. And lastly, sometimes make it entirely inexplicable, but keep the door open for player creativity or your own, later on.