Moon Meld Us, Poison Eaters, And We Shall Shine 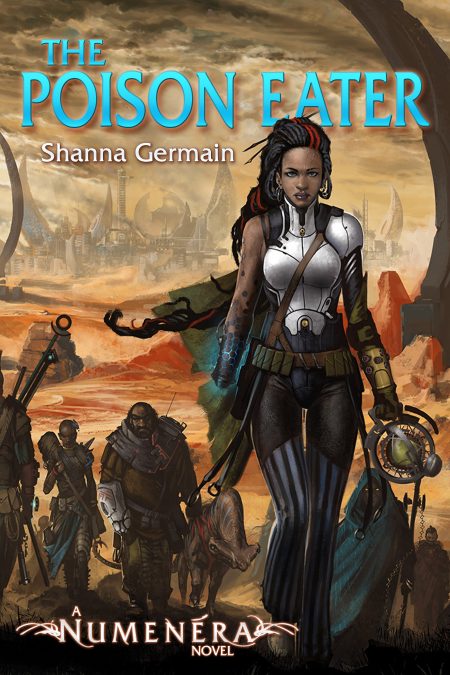 Depending on where you stood, the time of day, and your own state of mind, the Eye of Enthait looked like the moon, the sun, a child’s face, an egg, the inside of an eye, the black of the night. Yellow, golden, brown, beige, white, silver. Some said they could see creatures milling about inside its surface. Others that it was filled with machine parts. Or completely empty.

None of those things were what Talia saw. No one had ever asked her what it looked like to her. That at least was one thing she’d never had to lie about.

Last year, during our Into the Ninth World Kickstarter, you helped us fund our first ever line of Numenera novels. Fiction is something that’s near and dear to our hearts, so we were really excited to be able to offer these books up as stretch goals. And it got even better when the books were picked up by the fantastic publisher, Angry Robot for a wider release in bookstores.

The first novel—The Poison Eater—is in the final stages of production. It’s been proofed, we have most of the illustrations in from the talented team of Ben Wootten (who also did the fantastic cover) and Lee Smith (who is doing the cartography), and we’re now working on the details of the layout and the cover.

There’s so much that I want to say about writing this novel, but mostly I want to say how I hope it’s good and true to the Ninth World and full of characters that you will fall in love with and stories that will touch the squishy parts of your heart. There are lies and truths and memories that are hard to look at. There is love and shame and huge moments of wonder and despair. And of course, there are deadly poisons and dangerous creatures and weird devices.

But at its secret, truest heart, The Poison Eater is a story of our humanity. Humans a billion years in the future are not so different from the humans of now. We fall down. We despair. And then we search for some reason, any reason, to rise again and go forward anew. Sometimes we find that reason. Sometimes we don’t.

In the midst of writing this novel, I lost three family members to that eternal monster of death, and I remembered why we need stories of grief and living.

In the midst of writing this, our world changed, and I remembered why we need stories of hope and humanity.

In the midst of writing this, I fell down and despaired and could not rise, and I remembered why we need stories of wonder and promise.

“You can choose to save yourself or the city, but not both,” the orness said. “The aria has its costs.”

Of course it did.

“What did you choose?” Talia asked.

The orness looked at her, her eyes flickering between the illusion of health and her own white globes, already falling toward blind. “I will try.”

Kickstarter backers who are getting the novel will receive the illustrated PDF of The Poison Eater before Christmas, with the deluxe hardbound copies arriving in early January. The Angry Robot edition of the book will also be available in stores in late January, 2017.