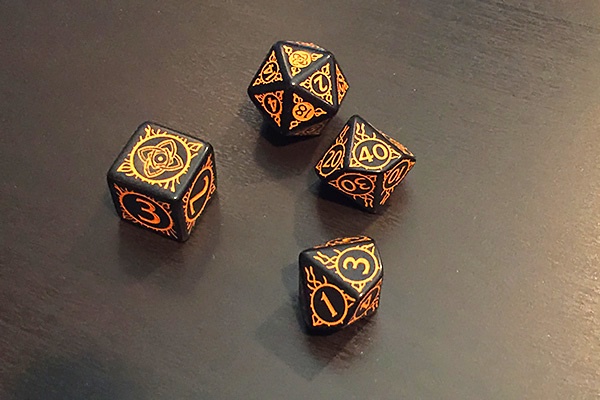 It’s the final week of New Gamemaster Month. Just a few more things to cover before you’re ready to run your game!

You’re almost a full-fledged GM. Basic training is about over, so this time we’re going to focus on honing the skills we’ve already discussed. Before we do, though:

What Do You Need?

Let’s talk about what you’ll need on the fateful evening (or afternoon, or, I suppose, morning) of your game. So far we’ve been talking mostly about skills and confidence, but this is about the actual physical stuff.

The short answer is: You don’t need much. You’ll want the Numenera corebook, of course, and you need a copy of your adventure (but since The Beale of Boregal is in the corebook, that’s already taken care of). If you’ve jotted down any notes over the course of this program and you’d like to have them along, well, bring those. Here are a few other things you’ll need around the table:

Additional copies of the Numenera corebook are handy, so you don’t have to keep passing your only copy back and forth. Hopefully one or more of your players will bring these.

Here are some other things that some folk like to have, but are not by any means necessary. In fact, you may want to wait until you’ve run a couple of sessions to decide which, if any of these things, fit your GMing style: 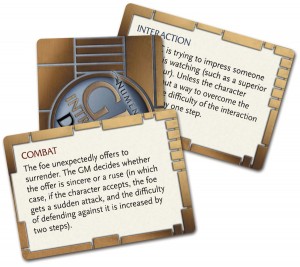 That may seem like a lot, but it’s a fairly exhaustive list, and everything in that second list is completely optional. (And I really mean everything—do not sweat it if you don’t have that sort of stuff. Like I said, it’s probably best not to even decide whether you want it until you’ve run a few sessions and have a good idea which of these will work for you.)

Two activities this time. First, collect the items we talked about just above.

Second, I have a bit more reading for you. This stuff is general GMing advice from Monte, who, in addition to having written Numenera, is an incredibly good GM with many, many years of experience.

Read these sections of the Numenera corebook:

That’s it! Thursday is our last post, and then you’ll be ready to go!

That’s it! If you run into any questions or would like to share your thoughts, we’d love to hear from you on the New Gamemaster Month group on Facebook. Thursday is our last post, and then you’ll be ready to go!