#EstateMission Contest for The Strange RPG

The Estate Foundation is actually a front for a secret group in the setting of The Strange RPG that monitors suspicious activity on Earth and recursions. When artifacts go missing, when unexpected things happen in recursions, or when recursion creatures cause trouble on Earth, the Estate Foundation sends its agents to investigate and deal with it.

(Speaking of The Strange, did you know we’re making the Strange Box, a special box set edition of the game? It’s on Kickstarter right now, and we’ve already hit several stretch goals!)

Since October, MCG has been tweeting #EstateMission plot hooks from @TheStrangeRPG on Twitter every week. Now’s your chance to be a part of it—we’re having an #EstateMission tweet contest! 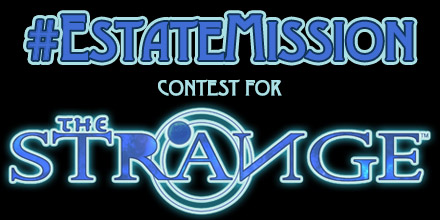 Here’s the deal: Submit a plot hook (or several plot hooks—as many as you’d like) as a reply to a specific post on Twitter, tagged with #EstateMission. Starting on February 27th, 2017, we’ll have the MCG team review these submissions. We’ll announce five winners on or around Wednesday, March 8th!

In addition to fame, celebrity, many hurrahs from those of us at MCG, and general satisfaction in a world well designed, here’s what you’re vying for!

The rules for this contest are:

Judging will be based on the following criteria:

Monte Cook Games, employees of Monte Cook Games, and those employees’ immediate family members are not eligible to take part in the competition. Any plot hooks submitted by these entities will not be considered by the judges.

Entrants must have an email address that is valid and associated with the Twitter account by which the entrant posts the plot hook.

The decisions of the judges are final. Monte Cook Games retains the right to disqualify any entry, for any reason, at its sole discretion.

Winners will be announced on our around March 8, 2017.

(And don’t forget to check out the Strange Box on Kickstarter!)