“Like a boss.”
INFORMAL used to say that someone does something very well:
I’m going to help you to GM like a boss.
~Retrieved from dictionary.cambridge.org

If you’re like me, you’ve had lots of bosses over the years. Several were okay, a few were good, while others were…let’s just say bad. A bad boss is a micro-manager, is jealous of their authority, and doesn’t trust you to do your job. A good boss, on the other hand, tries to remove obstacles that prevent you from succeeding, works with you to help you improve, and just generally helps you do your job better.

For the sake of this article, let’s say that you’re a good boss, not a bad one. So in this context, what does it mean to run your game like a boss?

Every game master (GM) has a different mix and number of basic principles that inform their games, even if only subconsciously. For now, consider these three basic GMing principles:

Don’t sweat the small stuff, or worry too much about the rules, which are there to serve as a framework, not a straitjacket. Everyone at the table wants the same thing—to play games together and immerse themselves in a fun experience. You get to help make that happen. You all inhabit a bubble of suspension of disbelief, where critical faculties are generally withheld in favor of what you, as the game master, describe.

That said, if you’re running a rules-dense game system where a player feels empowered to quote rules, establish early whether that’s something you’re willing to roll with, or not. In some cases, it’s great to have someone helping you reference spell ranges or sanity loss results while you concentrate on story arcs and what the NPCs and dangerous creatures are up to. However, if you tend to view such a player as a rules lawyer rather than as a helper, think about adjustments for the next time you play. Such adjustments could include changing game systems to a lighter system that focuses on GM judgment, having a talk with that player to see if they’re willing to shift their paradigm on what it means to have a good time playing the game, or if worse comes to worst, updating your player composition.

Be a fan of your players. Trust them and help them be awesome, and accomplish great things during the course of your game. In the Cypher System, we say, “That’s not cheating, that’s awesome.” That philosophy can be applied to whatever game system you’re playing. You’re the GM, which means every game mechanic is as flexible as you need it to be to support, at least in some fashion, the intentions of a player, even if those intentions are unusual.

Make sure you move the spotlight around the table.

A great way to accomplish that is to introduce qualifications to your response to out-of-the-ordinary player ideas. “Yes, and…” is a great tool, as is “No, but…” For instance, your player wants to push the bad guy into the mouth of a weird machine sizzling with strange energy when it’s not their turn. If you feel that it’s thematically appropriate to allow the PC some success in this case, you might say, “You aren’t as prepared as you could’ve been, but you still manage to lunge forward and knock the bad guy back enough so that they risk being sucked into the machine. But you’re off balance, and risk falling in, too! Roll.”

Finally, make sure you move the spotlight around the table. Give each player some of your attention, especially if you’ve let another player act out of turn, as just described, or if another player has otherwise been consistently active. That’s as easy as introducing an unexpected complication that is focused on a different character who must deal with the issue immediately. (In the Cypher System, we use GM intrusions for this very purpose.) 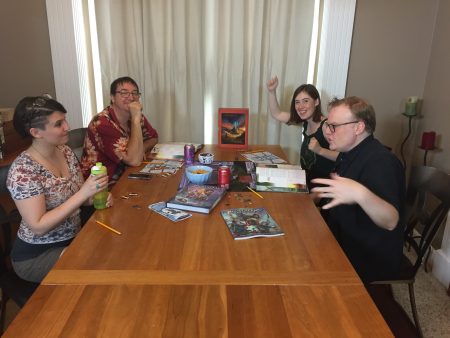 Being prepared means different things to different GMs. Mainly, it’s having prepped enough to feel confident that you can run the game session you intend. For GMs without a lot of experience running a game, it’s a great idea to read through the adventure you’re planning ahead of time (whether it’s one of your own creation or a purchased adventure). As you’re doing so, try to imagine the scene around the table as it might play out, how your players might react, and what you’d do in each case.

Sometimes it’s helpful to take notes or to annotate the adventure. Maybe put some bookmarks into the bestiary or creature manual you plan on using, or pull out the creature cards from a deck. Think about the NPCs that player characters are likely to meet, and decide what (if any) quirks they might have in their behavior or manners of speech.

Ultimately, all this preparation is in the service of making you feel confident. Even if your PCs go off in a different direction than you imagined, your preparation gives you a foundation that allows you to update the encounter on the fly.

You’ve got this. Prioritizing fun, being a fan of your players, and building your self-confidence by thinking ahead is how to run your game like a boss.

YOUR BEST GAME EVER

We want to help everyone have amazing games, so we’re making Your Best Game Ever: a tool book, not a rule book, for players AND GMs. On Kickstarter now!