I had the great honor of being asked to appear on Geek & Sundry’s Starter Kit show. My role? Run a six-session introductory session of Numenera for a group that’s never played the game before and teach them all the ins and outs. And of course, in so doing, teach the viewers as well. 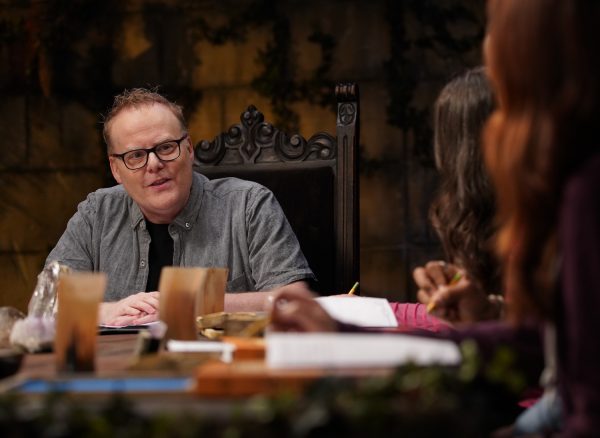 I didn’t know what to expect when I showed up at the Geek & Sundry studios. What I found was a busy place of dozens and dozens of professionals in the television and movie industry putting together more programming than I was even aware of, and yet everyone was extraordinarily friendly and welcoming. This was a place that brought in newbies and guests like myself all the time and knew how to treat them well.

Once miked up and in the studio, I was amazed at the gorgeous set they put together specifically for Numenera. Floating obelisks and weird constructs surrounded us. The table was covered in crystals that could very well be fantastically advanced machines. I also got to see the titular “starter kits” themselves—wonderful engraved boxes containing dice, notebooks, a dice tray, and more for each player, including a nameplate for their character. 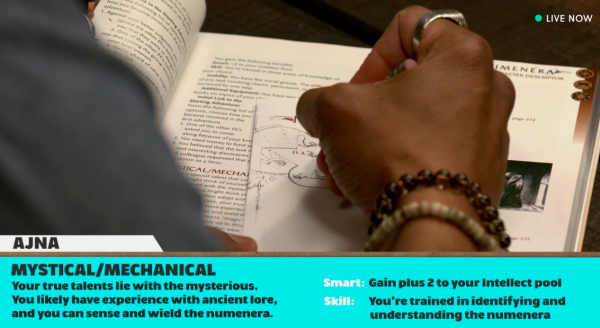 The first episode is character creation, but because it was a number of one-on-one scenes with the players, it took by far the longest. The other episodes are more or less just straight playthroughs of the game.

We specifically designed the flow of the game events so that I would first introduce task resolution, then combat, then resting and recovery. I examined all the Cypher System mechanics and made sure each one got presented so viewers really do learn the whole game. Fortunately, it’s not a complex system. Everything, from simple task resolution to NPC interaction to combat all works the same.

Although planned out (as you would with a typical campaign), the game’s not scripted. I didn’t always know what the players would do and that’s always the best part of the game for me. I love to be surprised by people’s creativity and this group certainly did not disappoint.

The finished show is incredible to watch. The production quality alone is amazing, but the show is fast-moving and well-edited with fantastic graphics showing game stats and artwork so you can easily follow along both in the story and in learning the game.

Starter Kit is showing on Geek & Sundry’s Project Alpha channel, found on their website here. You can get a free two-month trial if you sign up and use the code NUMENERA when you do. It’s absolutely worth checking out even if you already know how to play Numenera.

And if you don’t, well, learn from the guy who wrote the game on Starter Kit. 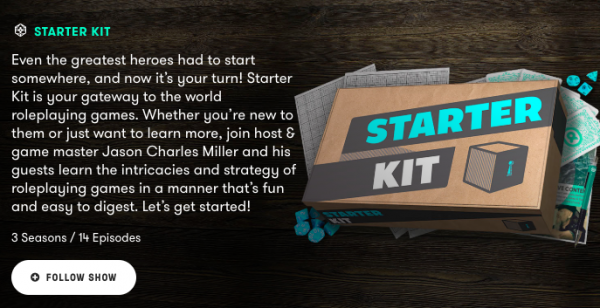 This entry was posted in Articles & News,Game Better. Bookmark the permalink.