The Core of Numenera Discovery and Destiny

Numenera is two books: Numenera Discovery and Numenera Destiny. Numenera Discovery is a revision of the original Numenera corebook. While it’s still the same game—and still compatible with all the previous products, of course—it offers new options for player characters, new material, new adventures, new art, and so on. 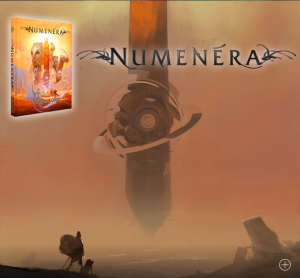 The genesis of Numenera Destiny really lies with the original Numenera Kickstarter campaign back in 2012. I had to come up with a single sentence that explained what Numenera was. Specifically, a statement that described what characters do in the game—something clear and yet brief. I came up with “In Numenera, characters explore the ruins of the past and discover wonders to help build a better future.” (There were many variations on this statement, but that’s essentially the idea.) The game originally handled the exploring the rules and discovering wonders part, but the building a new future was always left vague and open ended.

Now, that Kickstarter in 2012 led to the creation of Monte Cook Games and a whole lot of products. So Numenera Destiny came about when, in 2015, I pitched an idea to the Monte Cook Games team: that there was a whole second half of Numenera that we hadn’t even really explored yet.

From Minecraft to Fallout 4 and practically every other videogame, players had started awakening to the idea of building their own world, rather than just inhabiting one created whole cloth by a designer. As a player of various games like that, I loved the idea. And I realized that I’d always loved it in tabletop RPGs as well. Back in 1982 or thereabouts, I remember turning to my fellow D&D players, having just cleared out a dungeon, and saying, “Hey guys, we should make this our base!” We immediately began designing the changes we would make, thinking about the magical or mechanical traps and devices we wanted to install, and more. The game took on a whole new dimension as soon as we did this—and it gave us a whole new reason to go out and earn gold on other adventures.

Numenera Destiny, then, offers that expansion to Numenera players in concrete. Building and designing your own numenera devices, aiding a local community with what you build—and of course salvaging what you need to do so—are all such vital parts of how I see the game that I knew Numenera Destiny needed to be a second corebook, not just a supplement. Its sister book, Numenera Discovery, is complete unto itself, but in my mind Numenera really is both books together now. Because it’s not just about the stuff you discover, it’s about what you do with that stuff. Numenera Destiny is, in a way, a light at the end of a long dark tunnel. The Ninth World is a dark, dangerous place. But those brave enough and capable enough can overcome the challenges that come and move the world—or at least, their little corner of it—into a brighter future.

I think Numenera Destiny will reconfigure a Numenera game to be even more player driven, more exciting, and more fun. What will you build?

Interested in seeing more behind-the-scenes of the design and development of Numenera? We’ll be posting Numenera Design Diaries from the Monte, Bruce, and Sean weekly for the next few months. Check back (or subscribe to our website!) to get first looks at new character options, rules for building and supporting communities, and much more!

Preorder Numenera Discovery and Numenera Destiny and get the PDFs free!