Numenera Destiny introduces three new types: Arkus, Wright, and Delve. As you can imagine, a lot of design time, iteration, playtesting, and re-design went into their creation in order to make each one shine. Though this article talks about two major drafts, in truth each type also saw countless smaller updates, upgrades, and passes for consistency, clarity, and maximum enjoyment.

Wrights are builders and crafters. They can develop plans to throw together found components and create amazing objects and structures. Yes, it’s true: Wrights can make their own cyphers, artifacts, and installations (such as water purifiers, lightning towers, and force-shield generators). They can also craft automatons and even amazing vehicles.

Adding Wrights to Numenera meant we had to design a crafting system robust enough to support them. That included coming up with a variety of components called iotum, which can be salvaged from the numenera, as well as creating an assortment of plans for Wrights to choose from.

Designing the Wright helped us define one of the major themes of Numenera Destiny—the establishment and perseverance of community. We had to create the type just right, so that Wrights aren’t left at home while the rest of the group goes exploring, but they’re also not so powerful that they can create the perfect device for any situation that arises.

In the initial design, we came down a little too hard on the latter concern. Wrights were restricted in the kinds of plans they could find and develop in a couple different ways. But our playtesting revealed that this design was both too restricted and too random.

Which is why Wrights can now choose to develop any two plans they want each time they increase their tier. That includes plans for cyphers! Other PCs will be eager to have a Wright along in order to resupply them with an interesting cypher or two. Of course, the Wright won’t want to spend all their time outfitting their friends. They also have an ability called Always Tinkering, which allows them to whip up completely random cyphers with whatever parts they have available in about an hour.

PATH OF THE DELVE

Delves number among those willing to risk everything just to find something new, something that no one else has ever seen before. They are driven to expand the boundaries of the known, usually by rediscovering what was long forgotten. Delves delight in finding never-before explored ruins of the prior worlds and cataloguing them, top to bottom. Mysteries presented by weird machines and broken scrap are equally enticing to Delves. They know that what others dismiss as debris—worth little more than a few scavenged shins—might contain iotum. (The very iotum that Wrights need to craft with, as it happens.)

Because the Delve is a type focused on exploration, we had a pretty good idea of where we wanted it to go. However, the first iteration of the design draft didn’t quite reach that destination. The Delve wasn’t hardy enough, and was unable to withstand enough of the vicissitudes that exploration inflicts. More important, they couldn’t help other PCs do so. So we went through the Delve’s abilities and made sure that they had the opportunity to foil danger in various ways. But in order to make it explicit, we also added an ability called Foil Danger. Not every Delve will take it, but those who do will be able to negate one source of potential danger within immediate range each round. Because this ability is open ended, it allows the Delve to be highly reactive to a particular problem, thus aiding themselves and their fellow explorers.

DICTATES OF THE ARKUS

Arkai (the plural of Arkus) are natural leaders of the Ninth World, overcoming problems with wit, rhetoric, and the strength of a group working together. Thanks to their leadership abilities, Arkai have the potential to spearhead armies, cities, or even entire regions.

As it turns out, the initial design of the Arkus wasn’t too far off from what will appear in Numenera Destiny. The Arkus can gain more followers—using the newly designed followers system—than other types, if they wish. They can demonstrate a commanding presence so strongly that anyone who sees them automatically assumes they are a leader, and thus treats them accordingly.

Arkai also have a very important role in a group, which is to help everyone else shine. They can do this through overt leadership or simply by setting an example; it depends on a player’s particular take on their Arkus. The first-tier ability Anecdote, for instance, allows an Arkus to spend about a minute relaying an interesting—and relevant—story that provides the audience with training in a non-combat task for about an hour.

More direct is Inspire Action, another Arkus ability. In any given round, an Arkus can give an ally a free additional action. Some Arkai might not enjoy giving up their turn; thus, this ability is probably not for them. However, in the hands of someone who enjoys telling other people what to do, this ability can be very powerful.

Catch more sneak peeks of Numenera Discovery and Numenera Destiny by subscribing to our website! We’ll be posting Numenera Design Diaries from the Monte, Bruce, and Sean weekly for the next few months. You won’t want to miss these first looks at new character options, rules for building and supporting communities, and much more! 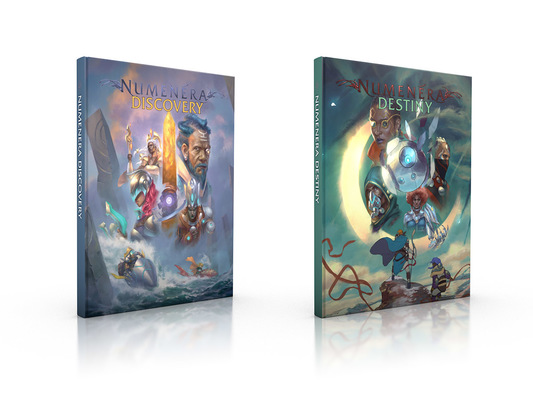