One of the components of the Black Cube of the Invisible Sun game that we haven’t talked about much is the GM’s notebook, which we’re calling The Guiding Hand. It sounds, perhaps, like a blank notebook for GMs, but it’s much more than that. First and foremost, this is a tool for organizing your various plot lines. As I’ve said many times before, characters in Invisible Sun don’t advance in level or tier. They advance by moving, step-by-step, through one or more story arcs, each time earning a few points to spend on new capabilities, secrets, spells, and so on. But because each player has their own individual story arcs, it can be difficult for a GM to keep track of it all. Because of course the group will also have its own larger arcs and plots and stories.

So a game master has to have a way of measuring those story arcs. The GM notebook includes a way to manage all of that. But it’s even more than that. It will actually offer a lot of prompts and suggestions for how to organize these stories to keep them moving forward. It will include reminders of individual story points. You can almost think of it as a day planner for your campaign.

Lastly, GM notebook goes a bit further and offers ideas for new potential arcs and events that a GM can use or ignore as they like. For example, it might suggest that, if you have a player who really likes the idea of advancing in her order, now would be a good time to introduce a new story arc based on that by means of an invitation to dinner from someone higher in her order.

That’s why it’s called The Guiding Hand. It’s not a campaign, but a tool to help you create and manage one of your own. 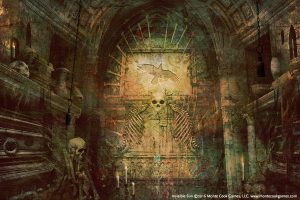