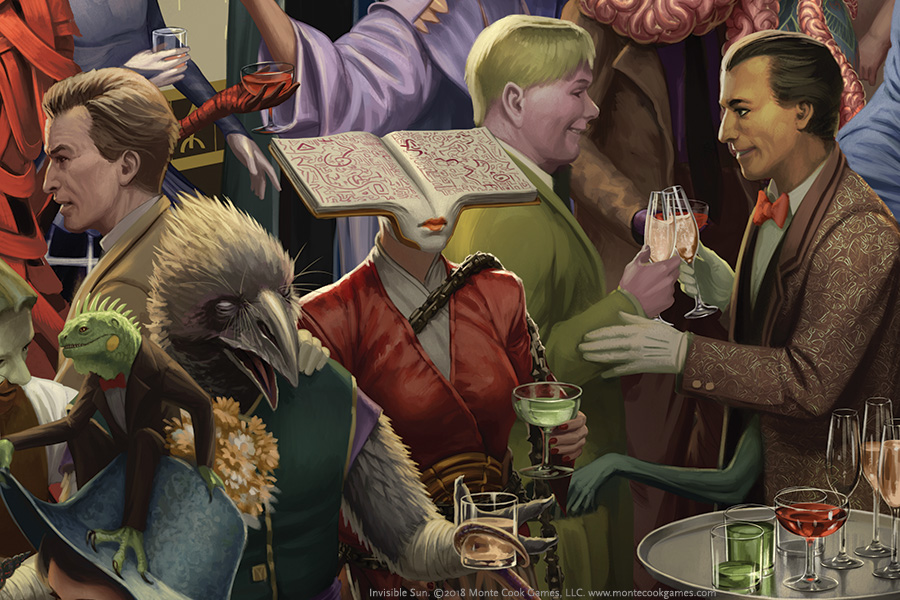 One day you’re chugging coffee in your car as you race to your humdrum job, and the next you’re summoning spirits, trading orbs for spell reagents, and pursuing mysteries of the Legacy and the Suns.

During your First Session of Invisible Sun you’ll not just build your character, but also work with the other players to characterize and describe each other’s homes and neighborhoods, likely located in the vislae district of Fartown. And what is it like to be a vislae, woken from your mundane Shadow life and realizing your magical abilities and life in Actuality? What is your typical Tuesday?

We hope you enjoy this excerpt from The Path, one of the four hardcover corebooks in the Black Cube. It gives you a little taste of life in Fartown, one of the many districts in Satyrine.

You wake up in the (late) morning, have breakfast, read one of the local papers, and get dressed for the day. Leaving your peculiar house, you walk down your peculiar street. A tiny, one-person dirigible flies overhead, narrowly avoiding a woman carried aloft by birds. Another woman walks gracefully from the roof of one building to another on a thin red ribbon.

A large man with a broad smile of tattooed teeth sells you a paper bag filled with hot roasted almonds. Each says your name when you pick it up and pop it into your mouth. A giant octopus aids in the construction of a new building, the previous one having been lost in a sudden violet tornado resulting from some carelessly conducted magical experiment. The other workers appreciate the eight muscular arms of help.

An automobile races by you, leaving tracks of frost and ice behind it. You feel the cold on your toes as you cross the street to the little bookseller’s you frequent. This side of the street is filled with music coming down from a glass-faced woman playing the bagpipes on the fire escape. The musician is a friend of yours, and you know each pipe she plays is also a telescope allowing her to view into another world. Her music serves as her attempt to describe what she sees. 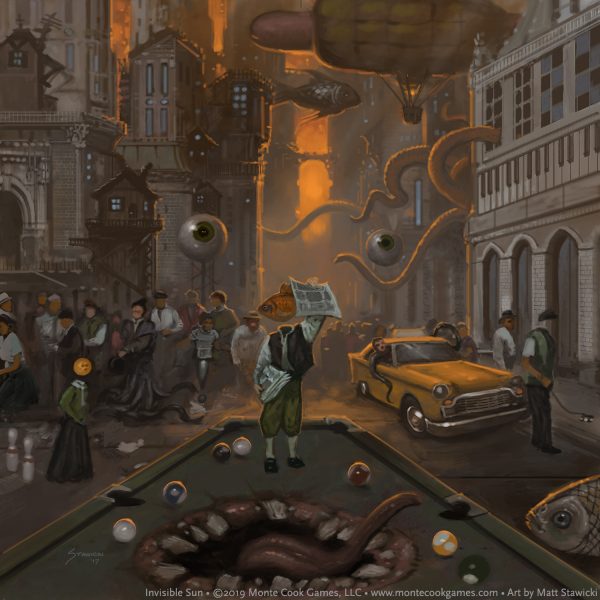 You duck as a pair of eyeballs—the visual representations of someone’s information- gathering spells—zip by, but you spill your bag of nuts, and they scatter across the sidewalk, silently. A thoughtform in the shape of a man with a broom scowls as he approaches to clean up the mess. You mumble an apology and dart into the shop.

The elderbrin bookseller is in. Today he’s taken the form of a squat, grey-faced fellow with a bright plaid shell like a turtle. He’s got that book you wanted on spells that work best in the evening, but as you pay you’re interrupted by a quarrel just outside between what appears to be a hulking demon and a woman with three faces and four arms, each arm drawing a dangerous-looking weapon.

You grab the book, lay your orbs on the counter, and hustle back toward home.

You’re a vislae, and this is Fartown. It’s just another Tuesday.

Invisible Sun, our award-winning game of surreal fantasy, magic, and secrets, is about to be back in print!

Preorder the Black Cube now and get all of the PDF materials for free, before this deal is gone: