Voices of the Datasphere, the first book of the Liminal Shores Kickstarter campaign, focuses on the datasphere, the mysterious network of ancient transmissions and information that sometimes gifts people of the Ninth World with visions and insight. The second book, Liminal Shore, describes a new physical part of the Ninth World unknown to the people of the Steadfast. This part of the world was never influenced by the Order of Truth—it has no common language to unify them, no formal religious interest in the numenera to elevate and direct their civilization, and no Amber Pope to force tyrants to get along. The Liminal Shore is a land that until recently suffered countless little wars over territory, honor, and resources. But in recent years, the people of the Liminal Shore were lucky enough to discover several active vertices of the datasphere, and this breakthrough in information and communication has allowed the many intelligent species living there to broker a fragile peace.

Unlike how the countries of the Steadfast have set aside their squabbles to focus on the Amber Pope’s crusade against the Gaians, the people of the Liminal Shore have bonded with each other in symbiotic and parasitic ways revealed to them by the datasphere. Some of these bonds are cultural, some are political, and the strangest ones are biological. Establishing and accepting these strange connections is a new way of life for the people of the Liminal Shore. There are factions and influential holdouts who shun these bonds in favor of the old violent ways. But for now there is a tenuous truce in these lands, giving all intelligent species the opportunity to study the numenera for purposes other than war.

Perhaps guided by a sentient portion of the datasphere, this research has unlocked amazing advances in modifying the numenera. Nanos and wrights have discovered ways to change the parameters of cyphers and artifacts, and are slowly transforming caches of war-focused numenera into tools for farming and crafting. Not that the Liminal Shore is free of conflict—bandits and abhumans prey on borderland villages, and warlords obsessed with the old ways still battle each other in the wild territories. Liminal Shore describes a land rich with opportunities for anyone from the Steadfast, whether their goal is information, civilization, profit, glory, or conquest.

Liminal Shore shows you an entirely new part of the Ninth World, as large as the Steadfast, with new countries to explore, weird beings to befriend or battle, strange ruins and vertices to discover, treasures of the numenera to claim, and adventures to experience. 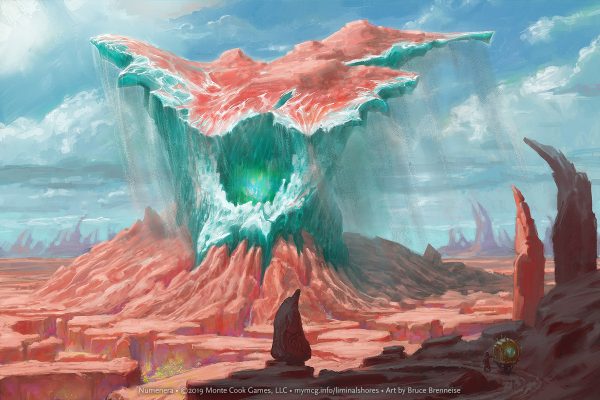 The Numenera: Liminal Shores Kickstarter campaign has already unlocked several stretch goals, and right now we’re working toward a stretch goal that increases the size of Liminal Shore by 32 pages!

This new content will give you additional locations, including one that ties directly into the Amber Monolith and the Obelisk of the Water God—two of the most iconic prior-world structures in the Ninth World. Further, we’ll include additional PC options for the species found in the Liminal Shore. Back the Kickstarter now to help us reach this stretch goal! 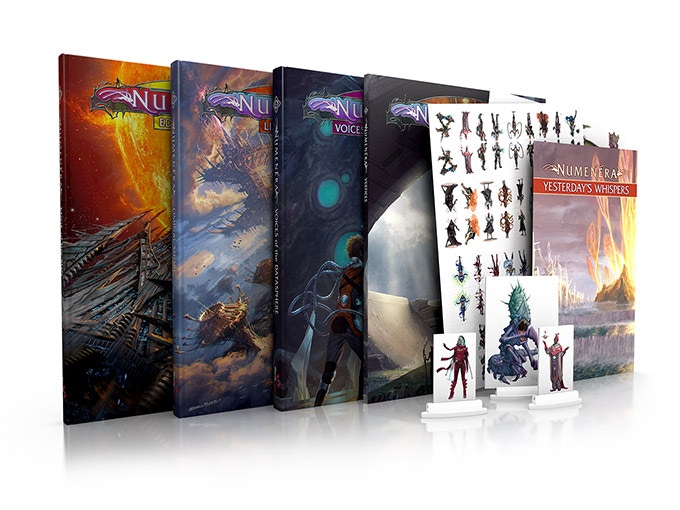 Backer levels like ONTO LIMINAL SHORES include all the unlocked stretch goals!