Announcing the Numenera 2 Kickstarter and the Village of Ellomyr 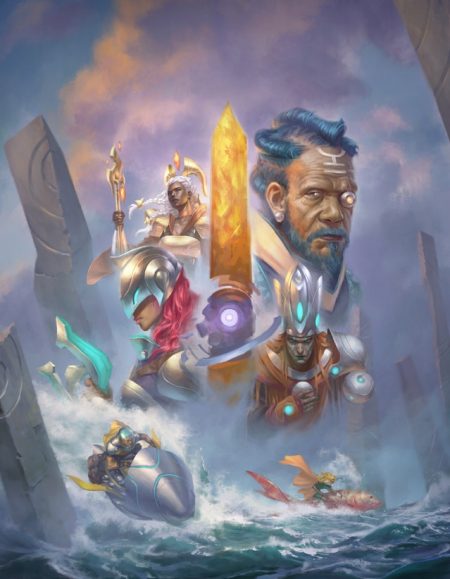 The Kickstarter for Numenera 2 goes live on the morning of Tuesday, September 19th, at 9am ET (Update: It is alive!). Numenera 2 is a gorgeous and evocative two-book set that expands the game in exciting new ways. It’s not a new edition; it’s more like the next step in the game’s evolution, focusing not just on exploring the ruins of the past, but also on using what you find to build a better future.

Numenera 2 is a major product divided into two corebook books. The first is called Numenera Discovery and the second Numenera Destiny. Discovery is going to be a book that covers familiar territory for many of you. In fact, it can basically be considered a revision of the original Numenera corebook.

Destiny will enable characters to truly become a part of the setting—to help shape the future of the Ninth World. It allows you to build adventures and campaigns in which players don’t just explore the wonders of the past—they utilize them to help lift the Ninth World out of darkness. You can read more about these books here.

A big part of Numenera 2 (specifically as it relates to the book we’re calling Numenera Destiny) involves helping and fostering a community and its people—making the Ninth World a better, safer place for its inhabitants. Thus, as a part of the Kickstarter campaign, together we’re going to be building and growing a Ninth World community called Ellomyr. Your involvement will directly impact the story of Ellomyr as it (hopefully, with your help) grows and flourishes.

The Ongoing Story of Ellomyr and the Trilling Shard

As a skilled adventurer, you have traveled more than most and seen your share of small, isolated communities in the Ninth World. There’s just something about the village of Ellomyr, however, that has caught your attention. The folk welcomed you warmly when you arrived, sharing their food and their homes. These people clearly work hard to maintain a pleasant place to live and raise their families. Like so many little villages, it lies in the shadow of ancient ruins that no one completely understands. Among other weird relics of the prior world, Ellomyr’s central square is built around the infamous and immovable Trilling Shard, an ancient symbol-covered stone that quavers with sound at rare times.

But the Ninth World is a harsh, unforgiving place, filled with dangers arising from the prior worlds. Raiders and strange, biomechanical beasts, weird radiation and mysterious technologies, terrible plagues and dangerous storms all threaten the people here. They need your help.

Over the course of this Kickstarter campaign, we’re going to be tracking the development of Ellomyr and hopefully watch as it grows and flourishes. But it will only do so if brave and capable individuals such as yourself help them overcome dangers and deal with challenges. As threats or needs arise, you, the backers, will help the village face these challenges. The more you participate in the campaign, the more easily the challenges will be overcome and the more Ellomyr will thrive and grow as a community. So please join us, and spread the word to your friends.

In other words, you will become a part of Ellomyr’s ongoing story. You’ll be given the opportunity to relate how you participated in the events that shape the community. When the campaign is complete, we will produce a sourcebook called The Trilling Shard that will be exclusive to backers of this Kickstarter that and detail Ellomyr and its place in the Ninth World. What will that place look like? We’ll only know when this campaign is complete.

We hope you’ll join us on Tuesday. It’s going to be exciting and fun!