Beyond the Book: Transcending Difficulty 10 in Gods Of The Fall

Beyond the Book is a regular feature here on the Monte Cook Games website, discussing ways to use the Cypher System to run a great game.

In Gods of the Fall, the old gods died. The world struggles under the yoke of murder, slavery, and corruption. Dark things have squirmed free of their divine prisons, and even the afterlife has become a realm of nightmares. But player characters can try to redeem the world, because they—and maybe that’s you—are nothing less than the new gods-in-the-making. They have a seed of godhood. They have a chance restore what was broken before the world vanishes forever into darkness.

Part of this godly power is conferred by divine shifts. Divine shifts power-up PCs, granting them the ability to exceed the normal rules of task resolution. Divine shifts are like permanent levels of Effort that are always active. They don’t count toward a character’s maximum Effort use (nor do they count as skills or assets). They simply reduce the difficulty of tasks that fall into specific categories described in the setting.

This works using the simple metric of judging the difficulty of a task for a normal person on a scale of 1 to 10, 1 being incredibly easy and 10 being basically impossible, as in any Cypher System game. This article focuses on difficulties above 10. Because in Gods of the Fall, difficulty caps at 15 instead of 10. Difficulty 10 is impossible—for mortals. Thanks to divine shifts, for gods, impossible means something different.

So, how do you assign levels in this new and heady difficulty regime? Let’s look at an example.

Let’s focus on the task of “lifting a heavy object” because it’s straightforward. Let’s start at the beginning. A PC with 3 divine shifts in “feats of strength” could lift weights of level 3 or lower as a routine action, without even rolling the die. If that character decided to become trained or even specialized in feats of strength, then weights of level 5 or lower could be lifted as a routine action. 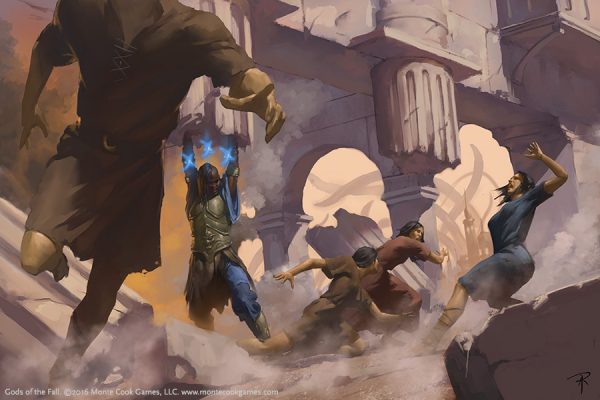 According to the Cypher System Rulebook, a level 5 task is one “even trained people would often fail.” As a GM, I’d read that to mean a level 5 weight would be one that even powerlifters (trained at lifting weights) would often fail to lift. Which would put a level 5 weight, depending on the weight class of the lifter, in the neighborhood of 500 pounds (225 kg). Of course, that’s just lifting a weight off the ground and setting it down again. Throwing a 500 pound weight is likely to be a level 7 task, at least in my game.  Note that 500 pounds is an average; powerlifter records are in the neighborhood of 1,000 pounds (450 kg), which some would peg as a level 8 task.

So how about a level 10 weight? According to the Cypher System Rulebook, a level 10 task is one that “normal humans couldn’t consider (but one that doesn’t break the laws of physics).” This gives me a lot of leeway. How much can a normal human lift? How about we just call it a ton, which is 2,000 pounds (907 kg). Impressive.

And what about Might tasks of level 11 and higher? Well, first of all, the scale doesn’t have to remain linear now that we’re in the realm of gods. In Gods of the Fall, we’re encouraged to think of each difficulty above 10 as one more step beyond impossible. Again, that’s a lot of leeway, and different GMs will decide things differently. Since I’ve gone down the “how much does it actually weigh” road this far already, let’s keep going. I’m not willing to call each step above 10 an order of magnitude increase—that strains even my incredulity. But I do think there is room for dramatic increases. We’re talking the realm of gods here. So here’s what I’d do; start with an order of magnitude increase at level 11, then triple each preceding value for the next higher difficulty. Which means lifting 10 tons would be a difficulty 11 Might task. 30 tons would be a difficulty 12 Might task. 90 tons would be level 13 Might task. And level 14 and 15? You know the answer.

So, could a god lift a mountain? The answer in my game would be, “yes, if it’s a small mountain”.

This is one example, but from this you can extrapolate how to set task difficulties above 10 for pretty much any task.

This entry was posted in Play Better. Bookmark the permalink.