This is the eighth in a series of articles by Monte about designing, running, and playing the Cypher System. You can read the first one here.

Last time, I discussed the way that GMs can use experience points to shape the ongoing narrative through “GM Intrusions.” That’s a way to award experience points (XP) in-game. But in the Cypher System, there’s also a more standard, “between sessions” method.

And no, it has nothing to do with killing monsters.

In the Cypher System, that thing is: discovery.

This can be the discovery of something your character can use, often a bit of equipment called an artifact. It can also just be the discovery of some new place, an important person, a procedure, a device, or even knowledge. Lastly, depending on the outlook of the GM and the kind of campaign the group wants to play, it could be something as abstract as a truth. This could be an ethical idea such as “what goes around comes around,” or it might be something like, “everyone has their price.” Even self-discovery can be discovery. Typically, discovery is going to earn PCs about half their experience points. 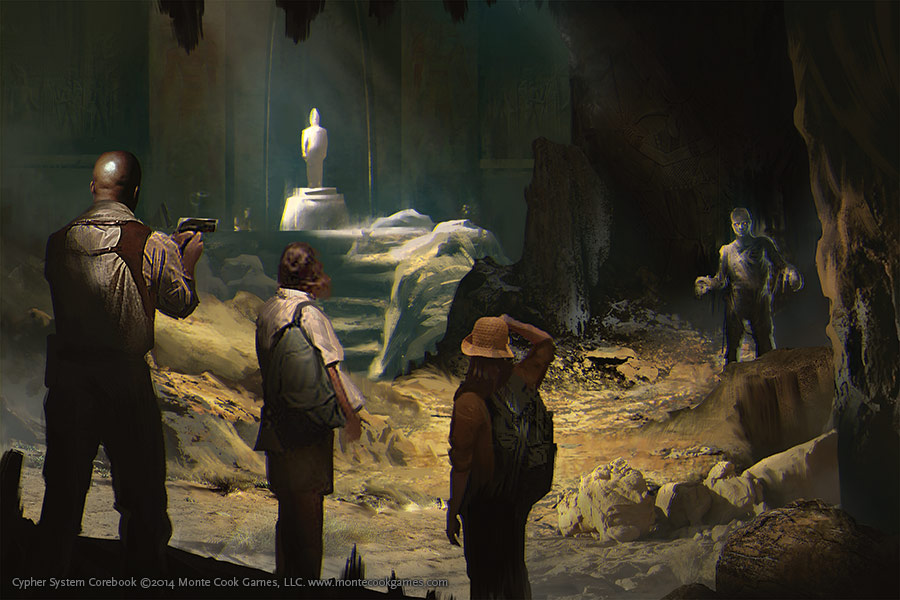 Players decide how they want to use the points they earn. There are short, medium, and long-term uses. The short-term, immediate use is that you can use 1 experience point to immediately reroll any die on the table (even one someone else rolls). This is pretty straightforward, and is one way for the players to gain some agency over what happens in the game (we’ve already talked about some others).

Medium-term uses are a bit more costly (but not much) and are usually story-based. A player can spend experience points, for example, while climbing through the mountains and say that these mountains are just like those found in the region where she grew up. In those mountains, she is skilled in climbing. This helps her at that time, and any time she might return, but it’s not as though she’s skilled in climbing everywhere. This might cost, say, 2 XP. Alternatively, another character, with the right components, might spend experience points to cobble together a device that allows him to breathe underwater, because he wants to explore a submerged complex. This gives him that ability for a considerable length of time but probably not permanently. Again, the story and the logic of what’s going on dictate the parameters. And again, this gives players agency, and puts less reliance on the GM to provide a solution for challenges that arise (some convenient mountain climbing or water breathing gear, for example)–the players are responsible for the means to their own successes.

Long-term uses of experience points are more costly still, and permanently affect a character. For 4 XP, you can gain training in a skill, increase your stat pools, improve your ability to use effort, and so on. When you do this four times, you ascend to the next tier (which in and of itself has some advantages).

The general idea is that most characters will spend half their experience points on long-term advancement and the rest on short and medium-term uses (which I think of as “gameplay” or “at the table” uses, because you use them during the session, not in between sessions). This means, of course, that some groups might choose to have in-game experience point earnings usable only for gameplay uses, and discovery points, awarded between sessions usable only for long-term character advancement. This would be particularly useful for groups that are used to a more traditional type of heavily level-dependent game who will likely (mistakenly) undervalue using experience points for other things. I wouldn’t do it that way–it feels a bit too rigid for my tastes–but it’s easily done.

Ultimately, the point is to make experience points–for both players and GMs–tools with which to shape the story and the characters, and not just a bookkeeping hassle.

Look for the final post in this series later this week. The Cypher System Rulebook hits stores in early August, but is available for pre-order now!