This is the second in a series of articles by Monte about designing, running, and playing the Cypher System. You can read the first one here.

My original inclination was to call this article “Player Empowerment,” but to be pedantic, that would have been inappropriate. Strictly defined, power is something you take by force, so it doesn’t really pertain to something like a game (or at least a game I want to play!). Authority is something granted either by a person or a group.

But who cares about terminology? I don’t want to get bogged down in semantics. The point here is giving players some ability to affect the outcome of the roleplaying game. Of course, they’ve always had that ability by making choices. It’s the primary engine upon which an RPG runs.

But what if players had more authority than that? Authority over mechanical elements, rather than story elements (although they can be closely tied). Some games (including some I’ve worked on) do this in the form of some kind of “fate point” or “hero point” that sort of allows a player to override game mechanics when he really needs to (often to save the character’s life). I am a fan of these, but what I wanted for the Cypher System was an integration of that kind of authority into the mechanics rather than having it override mechanics. 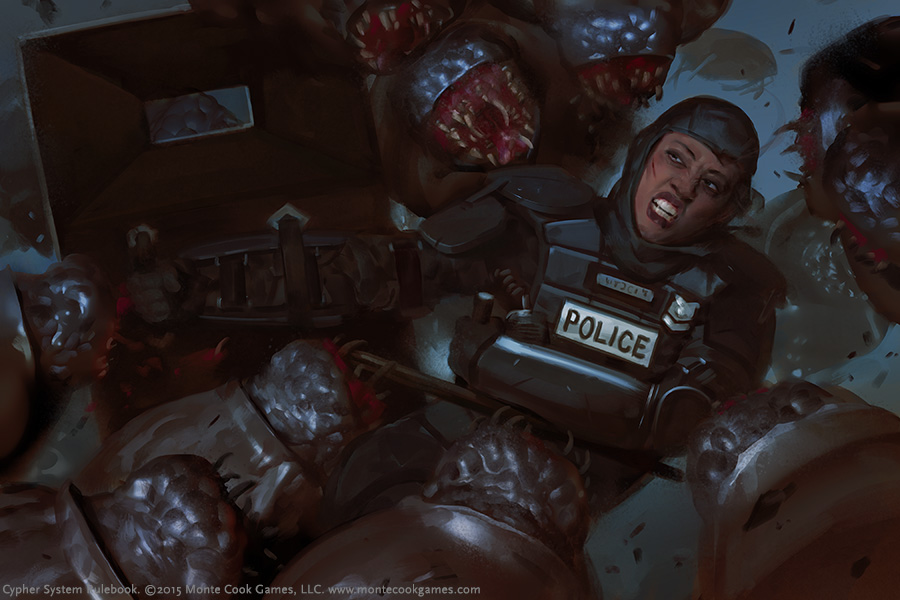 In the Cypher System, characters have a limited resource pool (actually three of them) in the form of their stats: Might, Speed, and Intellect. From these pools, they can draw the ability to affect the likelihood of an outcome or in some cases the intensity of the outcome. Any outcome. Rather than being limited by what the dice say and some flat modification based on his character, the Cypher System allows the player to decide, “this time this action is particularly important. My character will try harder now.”

This is giving players the authority to recognize that those two situations are different, and allowing them react to the situations differently in a way they couldn’t if they were always just adding the same bonuses to a die roll, no matter what the situation. So, for example, players can spend points from their Might pool and improve their chance of hitting with an attack—or add more damage to that attack by drawing on that same resource. Resource management is interesting, because if Might is also what governs your ability to smash down a door, and the player that depleted his pool with many, many powerful blows in the big fight with the lich king, he might not get out of the villain’s castle when it collapses. Maybe he should have saved a few points for just such an emergency.

At the end of the day, all good RPGs are about making choices. Giving the player authority over the mechanical effects enhances that.