Cypher System: Playing the Character You Want to Play (Part 2)

Last time we discussed starting with a character concept first, and then molding the rules around the concept. This idea is, if anything, even more important in the Cypher System Rulebook than in either Numenera or The Strange, because there’s so much ground to cover with all the possible characters in all the possible settings. 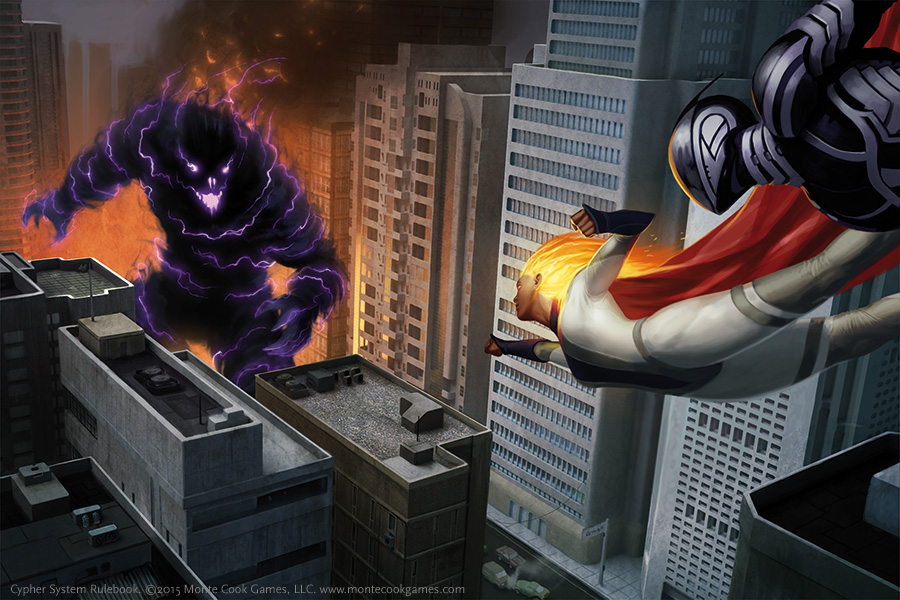 Let’s take a look at an actual example. In a superhero game I ran, Bruce and Shanna decided to create characters based on characters from the comics. (This isn’t necessarily the way the game is intended to be played, but it was a great measuring stick for a playtest.) Bruce chose Iron Man and Shanna chose Cyclops (each based more on the movie characters than the comics characters, but that’s not really important here). In the Cypher System, it doesn’t matter what the origins of the superhero’s abilities are—that’s just flavor—so the fact that we had a genius in armor and a mutant didn’t make any difference.

Bruce chose adept as his type. While this type is most obviously for people like wizards or psychics or people with powers like that, it was a good choice for Iron Man because Iron Man has a wide array of extraordinary abilities—he sort of does a little of everything. Bruce and I worked out the details together, so that even though the abilities were his, they came from the armored suit, with the understanding that if he’s “Iron Man” then he’s not a superhero without the armor—just a really smart guy. We renamed the type “Inventor,” as renaming each very generic type to have an appropriate, flavorful name is highly encouraged (many suggestions are provided for each genre). We also flavored the type with tech, which means he got access to a suite of alternate abilities that had to do with technology, repair, and so on. Bruce then chose a number of abilities that replicated wearing a powered suit, so that he got Armor, a ranged energy blast, a way to scan things around him and get information, and a healthy Might stat. He then chose Intelligent as his descriptor and Stands Like a Bastion as his focus (which is all about wearing armor, so that fit well). The only thing that Bruce’s version of Iron Man couldn’t do that the actual character could was fly, but we agreed that at Tier 1, flying was maybe a bit much anyway. (The Cypher System pegs that as more of a Tier 2 or 3 ability.)

Shanna chose warrior as her type, as Cyclops is practically a soldier in nature (in this case, we didn’t change the type name). She chose abilities that were mainly defensive in nature, knowing that her chosen focus, Blazes with Radiance, would provide her with a strong offense. This is a focus that works well for Cyke’s eye blast, although at higher tiers it gives some abilities that aren’t appropriate. We discussed how we’d alter those when that time came, using suggestions in the book (basically, swapping out abilities we didn’t want with either those on a short list of generally useful abilities organized by tier, or simply mixing and matching from another focus—either is viable, if the GM and player work together). Shanna then chose Empathic as her descriptor, basically because it reflected Cyclops’ leadership abilities.

Both players then got what are called “Power Shifts.” These are special options available only if the GM is running a full-fledged superhero game. With a power shift, a character can choose an ability, an attack, or a stat and increase its power rather dramatically by lowering the difficulty of tasks as they relate to what is shifted. It allows a super strong hero, for example, to be able to put his shift(s) in tasks having to do with strength so he can pick up a car or bust through a wall. This works far better than just inflating his Might pool (which would give him more stamina than brute force).

Bruce increased his Armor, his Intelligence (Stark’s one of the smartest people on the planet, after all), and his strength-related actions. Shanna shifted her defenses (remember, Cyke’s running around without any armor, and isn’t any tougher than a normal guy, so he doesn’t want to get hit), and of course increased the accuracy and damage of her eye blasts to incredible levels.

In the end, though, the real point here is that the players worked with the GM to create exactly the characters they wanted, within a rules set that encourages this interplay while retaining game structure. The players had models we were all familiar with to really put this to the test, and we succeeded and had fun doing it!