The Cypher System is meant to be really easy on the GM. Last time, we were talking about focusing on the story. Another way that we allow the GM to spend his time thinking about the narrative and not the mechanics is that all actions are handled by the players. That is to say (as we discussed earlier) the players can modify the difficulty of the tasks they attempt when they want, and then roll the die if needed. The thing to remember—and this is the kind of thing that makes people’s heads explode when they first hear it, so hang on—is that this is how everything works. The players are always making the rolls, and the GM is moderating the task levels. So in combat, when the character attacks, the player rolls for the attack. When the NPC attacks the character, the player rolls for her character to dodge or defend. The GM never has to pick up a die.

That has larger implications, too. It means that GMs don’t roll to see what an NPC does, or if the dam breaks, or the trap is sprung. He just decides, using the logic underpinning the game and what works for the narrative. If those two things clash, or if his decision seems arbitrary or capricious, he awards the players experience points (XP) for dealing with the experience.

The GM can introduce complications into the game that affect a specific player whenever it seems appropriate, but when he does so, he offers that player one experience point. The player can “refuse” the XP, but it costs the player one of her existing XPs to do so.

Here’s how that might work in play. Say the PCs find a hidden console with some buttons. They learn the right order to press the buttons, and a section of the floor drops away. The GM doesn’t have the players specifically tell him where they’re standing. Instead, he gives one player an experience point and says, “unfortunately, you are standing directly over this new hole in the floor.” Now, if she wanted, the player could refuse the point by spending one of her own, and then she would say, “I leap aside to safety.” Or, she could just make the defensive roll the GM calls for and let it play out. 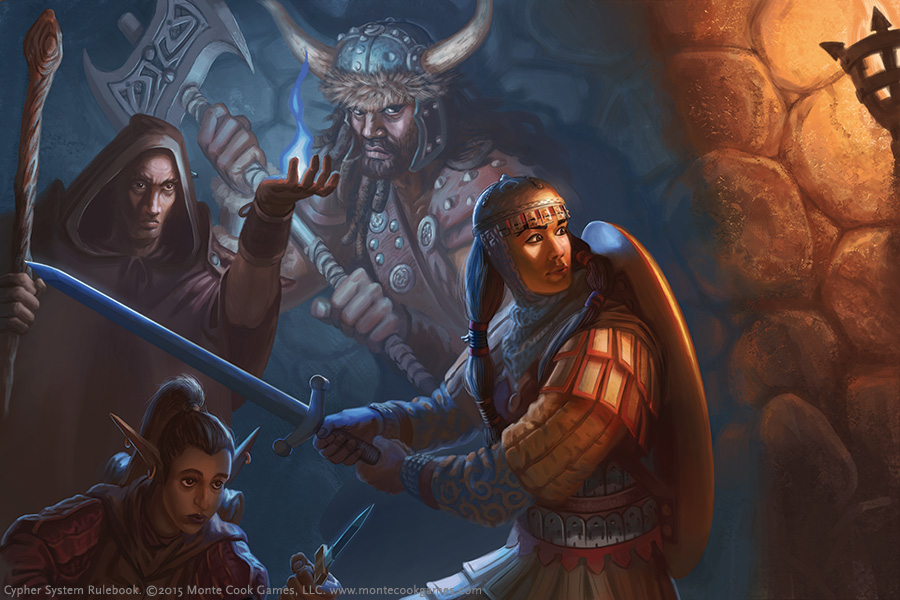 This narrative tool is called the GM Intrusion. It’s not intended to be mean; it’s intended to be a way for the GM to have events occur that introduce new elements of the story without rolling for them (or pretending to roll for them).

This is wonderfully empowering to the GM. Not in a, “ha ha, now I’ll trounce the PCs with my NPCs,” way, but in an, “I can control the narrative a little bit, steering it more toward the story I want to create rather than just relying on the dice,” sort of way. Consider that old stand-by, “the PCs get captured and now they must escape from the bad guys.” In heroic fiction, this is such a staple that it would almost seem strange if it didn’t happen. But in many roleplaying games, this is an almost impossible turn of events—the PCs usually have too many ways to get out of the bad guy’s clutches even before they’re captured. The dice have to be wildly against them. It virtually never happens.

But in the Cypher System, a GM can use this narrative tool to steer things. By that, I don’t mean, “you are all captured, here’s your experience point.” I mean more subtly. Things going wrong. The bad guys planning well. Fortune not favoring the PCs. Even if the GM accidentally makes it a bit too heavy handed, the experience point softens the blow. And remember, players can refuse GM Intrusions. It’s not meant to be a railroad tool, but instead a bit of a rudder. Not an inescapable track, but a nudge here and there.

And of course, the GM doesn’t have to have a deliberate goal in mind. He might introduce complications just to make things more interesting. When the PC is climbing that burning rope, and everyone knows it’s going to break at some point, the game now has a mechanism that ensures that it breaks at just the right time. And by “right,” I mean the most dramatic and interesting time.

Which brings us back to the idea that the mechanic offers a way for the GM to determine how things happen in the game without leaving it all to randomness. Bad guys trying to smash down the door to the room the PCs are holed up in? He could roll a bunch of dice and compare the NPCs’ stats to the door’s stats, and so on, OR, he could wait until the most interesting time, have the NPCs smash down the door, and award an experience point to the PC trying his best to bar the door. It’s a task resolution tool for the GM. That way, the GM doesn’t base things on stats, but on narrative choice. (Frankly, a lot of great GMs I have known over the years—even in the very early days of the hobby—run their games this way anyway. I like designing games toward how people already play.)

Obviously, this kind of thing requires a light hand. Used too often or used in the same way too often (Dolmar dropped his sword again?) and it becomes forced or jarring. Which means, of course, that GMs need other tools for awarding experience points. And players need some reason—or reasons—to care about them. I’ll discuss some of those next time.