This is the third in a series of articles by Monte about designing, running, and playing the Cypher System. You can read the first one here.

Personal player authority (as discussed last time) is interesting because although it gives players more authority, it doesn’t make things harder for the GM—it actually makes things easier. Because much of the time, the GM wants the players to really be able to “pull out all the stops” when it’s important. It gives the GM more freedom and flexibility to design the adventures and encounters he or she wants, without having to be slavishly concerned about their difficulty or lethality.

In a system without this sort of player authority, a GM can accidentally make an encounter too hard, wiping out the party or bringing the adventure to a screeching halt. By granting players an element of mechanical control, the players possess the ability to compensate. If the GM made the lock too difficult for the PCs to open, rather than the game coming to a screeching halt, the players can use points from their Pool to make the lock easier to open and the game has a chance to keep moving forward. The same is perhaps even more true, of course, of a combat or other more complex situation. 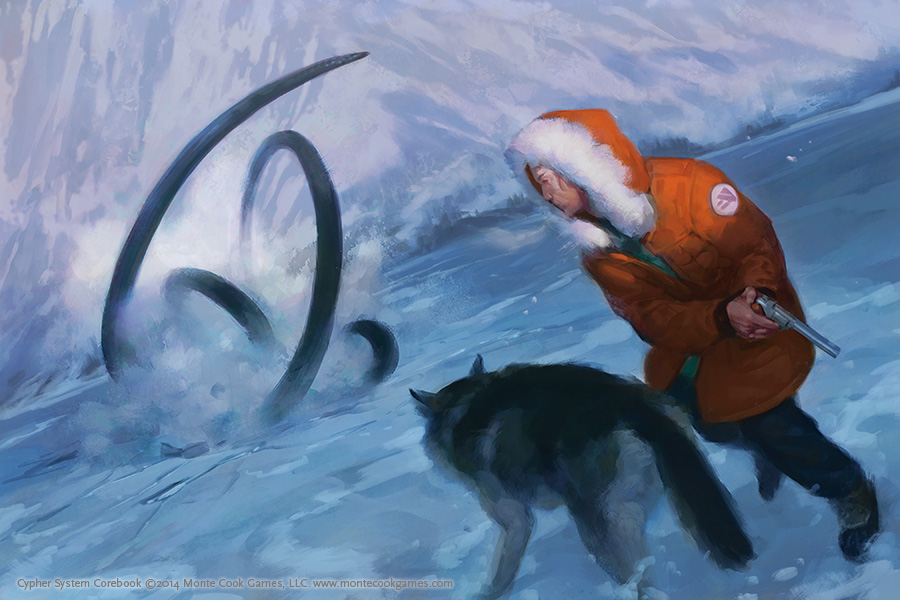 How can it be that giving players more authority doesn’t take authority away from the GM? Because this kind of control is over their characters and how their characters interact with the story. It absolutely shapes the story more in the way the players want, but not at the expense of what the GM wants. The Cypher System authorizes the GM to create tasks, encounters, and adventures that fit her narrative needs, without fretting over whether a specific stat, ability, creature, or task is precisely the right level of mechanical challenge. At the same time it authorizes the players to do what serves the needs of their characters, letting them prioritize based on the character’s motivations.

Another way to look at this is that the Cypher System grants players more authority by taking it not from the GM, but from the rules. If you remember, in a previous article, I talked about how there are three forces at work at the game table: the GM, the players, and the rules. The goal of the Cypher System’s design is to give more authority to both GM and players, at the expense of the rules. This means that the humans around the table can do more of what they want, and worry less about what the rules will “let” them do.