The sun is destined to destroy its children. Eventually, it will swallow all the planets closest to it and eject the rest into the infinite darkness. Already, the sun’s nearest child—the planet Mercury—is long gone. But not because it was eaten by the sun. At least, not directly.

Did some power of the prior worlds intervene in the sun’s natural aging process? Was their power truly that great? Doing so would have required a bigger-than-worlds engineering project. Could they have dismantled an entire world for building material? What other wonders did they achieve?

All that can be said for certain is that something now lingers at the very edge of the sun. Something vast, artificial, and ancient.

Is this colossal enigmatic structure the reason that the sun’s luminosity and size has remained relatively steady, even as civilization after civilization on Earth rose and fell? Or is something else even more mysterious the cause? Whatever the case, it’s a marvel. But even marvels of the prior worlds don’t last forever. Indications suggest that whatever has so long held the sun’s inevitable aging at bay has begun to falter.

People of the Ninth World have begun to notice that something is off with the sun.

Some among them have discerned the gargantuan object at the sun’s edge. They wonder if the object is a failing mechanism, and the cause of the sun’s instability. Or is it something else entirely? Glimmer bursts from the datasphere have become more frequent of late, and along with the mostly incomprehensible knowledge vouchsafed are hints that the sun’s edge object might be inhabited. Or is it that the sun’s surface itself is inhabited? Or both?

If there are inhabitants of the stellar structure, and/or creatures of plasma and fire that graze and hunt the sun’s surface, does the growing solar instability spell their doom?

And if so, does a related doom face every living thing on Earth and other children of the sun? Maybe. Unless clues in the datasphere are deciphered and a means for traveling to the edge of the sun itself are discovered. Only then is salvation possible. Though it is by no means assured.

Edge of the Sun offers a jaw-dropping, entirely new adventuring locale out in the infinite void, and thrilling, epic, adventures that potentially affect the entirety of the Ninth World itself. Although it can be a part of any Numenera campaign, if you were ever looking for an incredible finale, this would fit the bill! 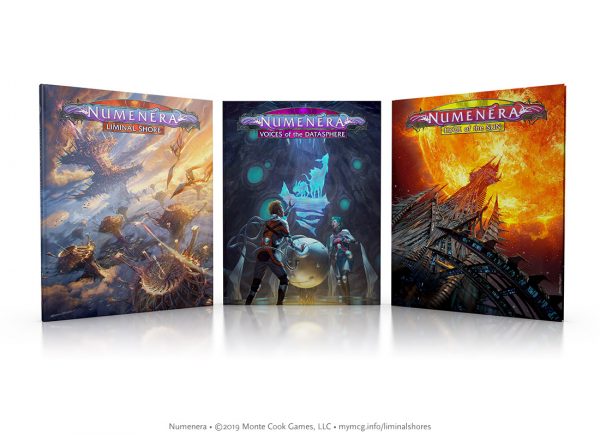 Numenera: Liminal Shores is three thematically linked hardcover sourcebooks for Numenera, all engaging with the elusive datasphere! Let the datasphere’s many interrelated networks take you to new lands, the metaspace of the datasphere, and the very edge of the sun itself.