Like many things, the Sooth Deck serves multiple purposes in Invisible Sun.

As a part of the setting, the Sooth Deck is a 60-card set of divinatory cards to played upon a board showing the Path of Suns. Each card briefly brushes across a strand of fate to learn what might be in store for the person in question. Each deck is divided into four families (kind of like suits in a standard deck), and each family has royalty cards (kind of like the face cards of a standard deck). The Sooth Deck is also something that a character might have and use within the context of the game.

As a part of the mechanics, the Sooth Deck is one of the primary tools in making magic unpredictable without making it cumbersome. It is used by the GM, who plays cards upon the Path of Suns board. Each card indicates a fluctuation in magic. Most enhance the spells associated with one sun and diminishing another. Each card is also tied to one of four card families: Mysteries, Notions, Visions, and Secrets. Each family is tied to one of the four types of Hearts: Stoic, Ardent, Empath, and Galant, respectively. Since every player character has a specific Heart, each also has an associated card family. When a card from your family is turned by the GM, you gain a benefit (unless it is the Apprentice or Nemesis card for the family, in which case, it’s a drawback).

The idea here is that, from time to time, magic shifts. The currents of magic create an ever-changing, complex tapestry of power. The currents move and change constantly, creating fluctuations granting certain varieties of spells and other magical practices a brief facilitation or impediment. Vislae perceive these changing patterns. They feel them in their very bones and along their skin. They can react to these changes because they can see them as they happen, almost like being able to take a peek backstage at a play and see the costume and prop changes, and which actors are waiting in the wings about to come on stage. Vislae see this (metaphorical) play like everyone, but they get glimpses of the backstage as well. 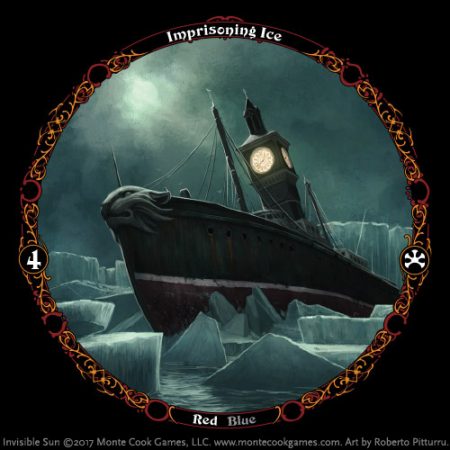 If a Sooth card enhances Red magic, that means that spells and other magical practices involving destruction and violence are enhanced. An enhanced practice either adds +1 to its level or costs 1 less Sorcery to cast. If the card diminishes Blue magic, that means practices involving the mind subtract 1 from their level. Spells and other magical practices always have their associated sun color listed, so this is easy to track and is objective, rather than subjective.

(We’ll talk about all the various kinds of magical practices, of which spells are just one, next time.)

Magic in the game, then, is always changing. The right spell to cast last round might not be the best choice this round. The Sooth Deck creates a dynamic, fluid magical environment forcing everyone to keep on their toes and adapt. People accustomed to always casting the same spell every time they come into a particular encounter might need to vary their tactics. Magic is too wondrous and too unpredictable to become rote and humdrum in that way. The Sooth Deck conveys that truth without bogging the game down.

The other mechanical element of the cards is that each has a number assigned to it, from 0 to 9, and thus can be used to generate results rather than dice when dice aren’t handy, such as in a Development mode side scene. 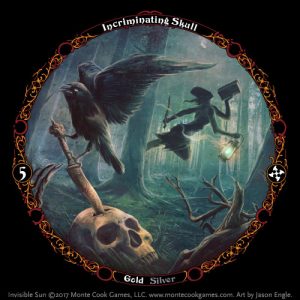 There’s one other use the deck offers, however, and that’s for the GM. Sometimes, in the thick of a session, GMs need a little creative nudge. The Sooth Deck is an idea generator. Every card has a small set of meanings—the Incriminating Skull means discovery and evidence, but it also means disaster. It won’t take long for these definitions to become ingrained in the mind of the GM (you use the Sooth Deck a lot in play), and—if they want to—the GM can take one of those meanings and incorporate it into the game in an impromptu fashion. Because Invisible Sun is a game where the GM might find themselves running a session reacting to what the players do as opposed to running through a prepared outline or script, this kind of inspirational help can be a godsend. It’s like a GM safety net. Need an idea of what’s in this new place the PCs have just entered, or what the NPC they have sought out is like? Draw a card. With the turn of a card like Incriminating Skull, the GM might have the PCs make a sudden discovery, but perhaps one with dire implications. This is not mandatory. It’s optional. But I will say that it’s fun to take the card you’ve just turned and give it a dramatic in-game effect as well as the mechanical one. It feels like you’re doing a divinatory reading for the group mid-game.

It takes a session or two to get the hang of it, but as time goes on, the cards of the Sooth Deck will become a more and more integral part of the game session and will help to make the game more dynamic and fun. 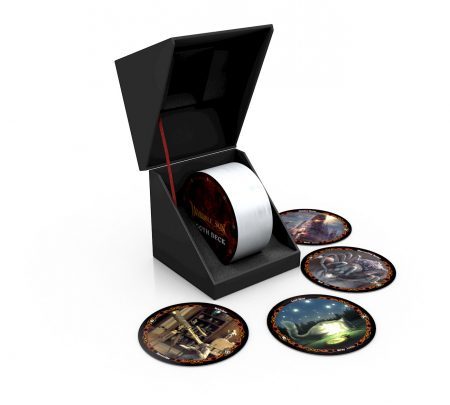 This entry was posted in Design Diaries,Design Lab. Bookmark the permalink.