That was five years ago, and I’m very happy with it. But—and you knew there was going to be a “but,” right?—I’ve changed my tune a bit.

Because one of the very valid criticisms of the Cypher System is that people who really want to get in there and “tinker under the hood” so to speak, to really get the character precisely the way you want, with lots of decisions and choices, find it difficult to have that experience. For a certain type of player, the CS character creation can be almost too easy.

I thought a lot about this, and ended up creating Invisible Sun partially as a reaction to it, and where my investigations went, spurred on by this feedback.

In short, Invisible Sun has taught me to love character creation.

Part of that is because it’s a tinkerer’s dream. You get to make all kinds of choices about your character, their home, and their background (two backgrounds, really, because you decide what your real backstory was in the Actuality, but also what your story was in Shadow as well). To be clear, you don’t have to obsess too much over backstory and whatnot if you’ve no interest, but if you want to, it’s all there. Dive deep. Have an idea of where your house is, what it looks like and how you want to furnish it? Who your friends are, who they’re connected to, and what your shared past is? What your goals are, and how you want to reach them? Great. And it’s not just fluff. These things actually matter.

But the other way in which Invisible Sun has taught me to love character creation is because the game makes character creation part of the group activity at the game table. Because that’s the part of the game I want to get to. That’s the fun, social part of why we play RPGs: Being at the table with our friends and exercising our creativity together. So what Invisible Sun does is it has you bring your mostly finished character to the first session, and the first session is used to finish each character as a group.

Here’s how that works. I create a vislae character, Trevor. Let’s say he’s an Eremitic, Galant Maker who Understands the Words. He’s tall and thin, with large hands that are surprisingly good at using tiny, precise tools in his work. When he’s not in his workshop making stuff, he’s in a very public place (like a bar or cafe) writing. What most people don’t know is that he’s writing down everything he overhears people saying. Not because he cares about their business, but because he likes the play of words and like to think about their meanings. He knows words have power and wants to study them very carefully. Trevor’s chosen Foundation (Eremetic, the part of his character that describes his background) allows him to have a unique house, so I’ve decided Trevor lives on the train that runs through Satyrine, the city where all the characters begin.

I bring Trevor to the first session. Everyone else brings their characters too. We present them to the group one at a time, and then everyone works together (in a process facilitated by the GM—it’s all laid out in the rules) to brainstorm ideas for the neighborhood in which each character lives. I learn that David created a character named Arralin, who is a Weaver. David says Arralin lives in a big, dramatic house made mostly of glass. At that point, led by the GM, we start going through a process where we decide where the house is, who lives nearby, what other points of interest are nearby, and what the local rumors or issues are. So together we decide Arralin lives next door to an NPC vislae who’s cranky and doesn’t like anyone using magic near him. We also say that his house is down the street from a really great café (perhaps where the PCs will all gather for the first time). But it’s not all good, as the neighborhood is being haunted by the rampaging ghost of a car. 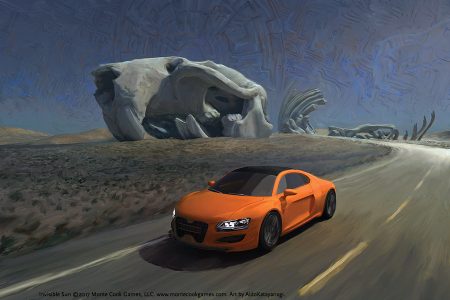 When it gets to Trevor’s turn, things get even more interesting (and creative) because Trevor’s on a train. No conventional neighborhood for him. But the group rolls with those punches and quickly comes up with a “neighbor” who’s actually a train conductor who’s trying to get Trevor to help him with an interesting situation. Turns out there’s a woman who rides the train regularly, but her exact duplicate also shows up from time to time. The conductor says they have to be kept apart at all costs. Neither the woman nor the doppelganger can know the other exists, but the conductor doesn’t say why.

Now, while I came to the table with some ideas for character arcs and stories for Trevor based on my concepts in his backstory and personality, the group just wove a story that’s so compelling I want to play immediately to see where it all goes. And we don’t just do this for Arralin and Trevor, but for everyone in the group. And when we’re done, the GM assesses overall whether each character starts out from a point of Joy or Despair, based on the decisions the group made. Remember, these are a sort of experience point, and you need both to advance, so there’s advantages—narratively—to despair.

But even more important than that, we’ve all just woven together some fantastic starting points for a whole slew of stories. These stories are particularly engaging because they’re a part of each character. This is way better than the GM dropping in some extraneous plot that we then try to justify being a part of—we’re already a part of these stories. That’s why I don’t call this a special character creation session. I call it the First Session, and it’s not optional. It’s an integral part of the game that gets each play invested not only in their own character but in everyone else’s. We want to find out what’s up with that ghostly car just as much as David, because we’re the ones that came up with the idea. Everyone wants to learn more about this woman and her double because they were all there when the story came to life.

Character creation isn’t the hoops you have to jump through to get to play the game, it is playing the game, both away from the table and there with your friends. And it doesn’t stop at the beginning. It’s an ongoing process with all new decisions that come later. But that’s another story.