Peek Inside the Jade Colossus

Jade Colossus: Ruins of the Prior Worlds is an unusual book for MCG. It’s a sourcebook for a city, an adventure, and an engine for creating and populating countless other weird sites in the Ninth World.

Part 1 gives an overview of the book, details on the “midnight stones” (cypher-like stones containing void matter that can be used for various purposes) found within the Colossus, legends about the structure, campaign threads, three new foci, organizations, and introductory scenes.

Part 2 explores the city of Ballarad—the site where the Colossus erupted from the ground five years ago—and some areas of interest on the Colossus’ exterior. The people of Ballarad have repaired some of the damage to their town and adapted to the constant stream of explorers visiting the ruin in the hopes of discovering rare and powerful Numenera artifacts. 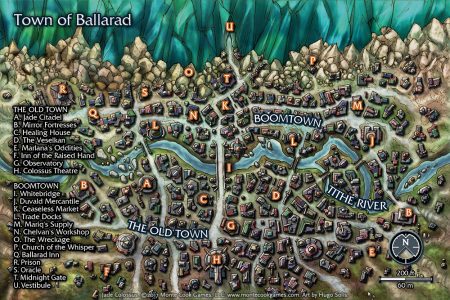 Part 3 details five specific areas within the Colossus, including the Mouth of Exaltation (a giant flame-tongue mouth that speak answers to questions asked and unasked), the Hand of Fury (a gigantic synth hand that repeats fighting moves from countless forms of unarmed combat), and the Eye of Transcendence (an eye larger than a human body that grants knowledge of the past and future, but at the risk of a burning death).

Part 4 describes ten other ruins, each with its own history, strange abilities, and dangers. Although each of these is only given a page, you can use the last part of the book to flesh them out into something as large and expansive as you need them to be for your campaign.

Part 5 is the most meaty and creative part of the book—the Numenera Ruin Mapping Engine. Presented as more than 20 tables with details on rooms, exits, local creatures, weird events, rival explorers, and other features, the mapping engine is much more than a “random dungeon generator”—each section encourages you to think of the results as a prompt for your own weird design, as opposed to letting the dice call all the shots. It’s this section that scratches the itch of do-it-yourself GMs and fans of old-school rules: you can roll a bunch of dice, see what comes up, and plug it all together in a way that suits your campaign and GMing style—and at 48 pages, the mapping engine has a lot for you to work with. This part of the book concludes with write-ups of eleven new creatures tied to the Jade Colossus.

Do you want to know more?

Unlike most of our Numenera releases, Jade Colossus is not part of any Kickstarter campaign—you’ll need to buy it at your favorite local game store (or online at the MCG Shop). If you plan to buy it at a game store, please ask them to order it for you; we want to make sure the stores know to have it in stock for its release date in early August!