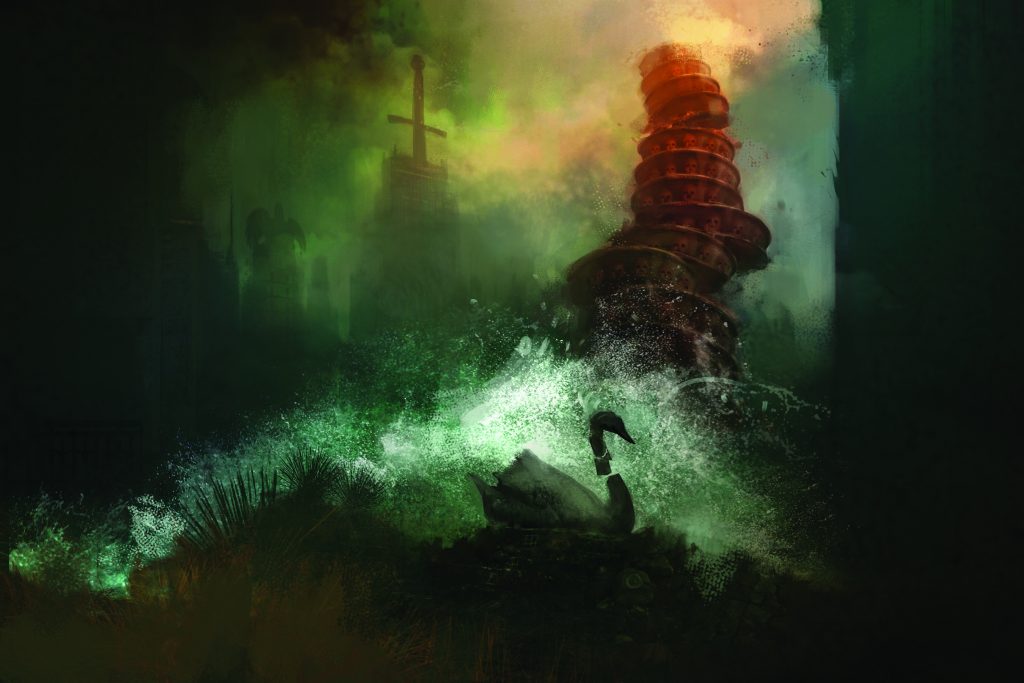 Note: Invisible Sun is now available for preorder, which gets you bonus material!

When I was a kid I liked to look at all the sci-fi and fantasy book covers in the library and the bookstore and imagine what was inside based on the image, before I even read them. (In some cases, instead of reading them.) But we’re talking about the ’70s, and the style at the time for sci-fi books in particular was a very non-literal approach. Rarely was a scene from the story depicted on the cover. Instead, the art represented the ideas inside the book.

But I was a kid. That level of metaphor was a bit lost on me sometimes and I thought that the representational art was literal. So when I saw a scene with a giant eye looking down at a city from above, I thought that somewhere in that story there would be a giant floating eye in the sky. But of course there wasn’t—it was probably a dystopia story about surveillance, or maybe alien observers or something.

Eventually, of course, I got older and understood how metaphors worked. And I still really appreciated the metaphorical imagery in covers and whatnot.

Now it’s many years later, though, and part of me is still thinking, what if it was all literal? What if colorful lines of poetry, surreal artwork, and metaphor-rich tales were all literally true? What if the actual world was the strange surreal world that is usually reserved for dream-like imagery? And what if that world were the setting for a roleplaying game?

That would, obviously, be Invisible Sun.

The world isn’t so difficult, at least at first. It’s just a matter of letting your imagination run wilder than normal. It’s not just a floating city, it’s a floating city held aloft on giant moth-like wings. It’s not just a demon with big claws who wants to eat you, it’s a demon who hates time, with a clockface (with no clock hands) instead of a normal face, who steals time from you so you die sooner. And so on.

That does mean, however, that GMs will need to shed any sort of hangups they might have about believable biologies or ecologies, or the long-term implications of an idea thanks to the laws of physics. Because if there’s a fortress that is built on the back of a giant turtle and you spend your time thinking about the volume of plant matter a turtle of that size would need to consume to live, you’re missing the point of a surreal setting. Likewise, if there’s a locale where everyone must speak in rhyme or they float up into the air as if gravity is reversed and you feel the need to develop a long explanation of why and how that actually works according to the laws of conservation of energy, surreal gaming might not be for you.

It’s just a matter of priority. In a surreal setting, you put ideas and visuals before rationality. Some people might think it’s lazy or haphazard to not be able to explain the reality of everything in the fictional world, but in truth it’s just a different way of looking at things. The explanation and physics of it all isn’t the point.

At the same time, though—and here’s where surreality can get difficult—you can’t go too far. You can’t just have it be “everything goes, all the time,” and abandon the idea of cause and effect entirely. Utterly random and haphazard events, all the time, lose all meaning. And meaning is important to surreality. In fact, it’s possibly more important than in another kind of setting. Meaning is as important or more important than explanations (or justifications). You’ve got to have balance. The players need something solid to hang onto, something that they can understand and count on. In Invisible Sun, I created the city of Satyrine to be that. It’s a weird and wondrous place, but you can understand it. It’s (fairly) firm footing to stand on, particularly at the beginning of the game. This is one of the many reasons why player characters (PC) all have houses in this game. Because having a house that exists on a street that runs through a town is grounding. Not only does the house tie the PC to the setting (and encourage them to stay in Satyrine in the early stages of the game, before venturing into the far stranger realms of the Path of Suns), it gives the player some control over that most relatable corner of the setting. You have that firm footing to stand on for certain because it’s your house and you decide what that house looks like, what’s in it, and so on.

But I digress. The larger point is: the things that the PCs encounter, the people that they meet, and the things that happen still have to have meaning. The people in that fortress on the back of the turtle don’t talk to the PCs about what the turtle eats, but they do say that they stay up on its back because it’s the most defensible place to be during the frequent attacks from skin-stealing pirates.

As I said, though, in an RPG it’s not just about the setting. It’s also about the characters. In Invisible Sun the characters are not apart from the setting, they’re a part of it. Thus, the characters are also surreal. This means that from the get-go, the players can choose some really weird abilities for their character, allowing them to eat knowledge out of books (or brains) they touch or intentionally (and safely) shatter into a million pieces only to reform again. It means that, to immerse themselves into the poetry of the setting, characters can gain abilities called things like The Voice of Blind Devotion Speaks Only Soothing Lies or Anger Hates Itself the Most of All. When a player at the table says things like, “I cast The Book’s Offer is a Welcome Escape” it is clear to them, and to all the other players, that they aren’t just in a wondrous world, they are a part of it. They’re wondrous too.

Just as the setting is extremely visual in its surreality, so too are the characters. In fact, what I realized early on was that as the players experience the weird and wondrous world they are in, it could—and in fact, should—be a goal for many players to become more like the setting. It’s aspirational. Not something that happens right away (so players can start off a bit grounded), but something that happens over time—because they players want it to. So while the generally relatable human characters start off with some minor quirks, they eventually earn the right to go to a changery and make any physical modifications they can imagine. Want a giant metal cube for a head? An extra arm? Detachable eyes? Want to exist in the form of a swarm of flies? The answer is always yes (although making it happen isn’t necessarily easy). Making such transformations aspirational casts a spotlight on the character’s (and player’s) relationship to the setting and the game as a whole. Rather than powerful and experienced characters who gain amazing powers becoming less and less akin to the mundane world in which they live, Invisible Sun characters become more and more like the surreal and wondrous setting in which they live. It’s a sort of reward as surely as any kind of mechanical bonus or treasure, but one that appeals to the both the roleplaying (rather than game mechanic) side of the experience and to the very fundamental nature of why the player is playing this game and not something else.

To put it another way, the players “win” the game by joining with it, not by fighting against it. Nietzsche said, “He who fights with monsters might take care lest he thereby become a monster.” His only mistake was assuming that was a bad thing. Weird, surreal monsters, metaphors taken literally—at least in the escapist context of a game—can be a lot of fun.