The Path of Notes

If you’ve played RPGs, you’ve probably taken notes about your characters’ adventures. The game master inevitably introduces the names of NPCs that you want to keep track of, dangerous creatures or groups to stay clear of, or the legend of an important item that everyone in the campaign world is scrabbling for. Depending on your own predilections and the game in question, those notes might be a few words or phrases written on the side of your character sheet, a journal, or even a cross-referenced online solution.

If you’re already a note taker, then you’re going to excel at playing Invisible Sun. Because at its core, Invisible Sun is a game about discovering secrets, surreal lore, and previously unknown interconnections. Such knowledge might be the name of a demon you’re hunting and where it’s gone to ground, the true nature of the changeable bar called Zero’s, the best place to research magic about the mind and dreams, or how one goes about getting a visa to visit the dead who reside under the Pale Sun. The more your character learns, the more knowledgeable they become, and as a player, the more able you are to make effective plans.

Which means that unless you have an amazing memory that requires only a few trigger names and phrases, you’ll want to come up with some sort of way to take and organize notes for your Invisible Sun game. In our ongoing campaign, each of the four players (me, Susan Morris, Sean K. Reynolds, and Shanna Germain, with Monte Cook as the GM) has created their own custom solution for taking notes.

Sean, who’s blessed with the aforementioned amazing memory, does indeed limit his notes to trigger names and glossary terms. On the other hand, his custom character sheet for his Vance (one of the 5 character Orders in the game) is visually awesome. 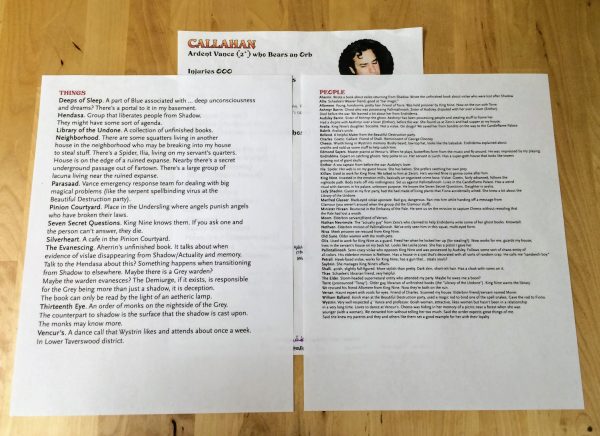 Susan prefers physical journals. Pen in hand, she can quickly write whatever she feels is important as it happens. Moreover, as an aid to memory and because it’s fun, she sketches interesting aspects of the story right into her notes. She’s like an Invisible Sun naturalist in that way. 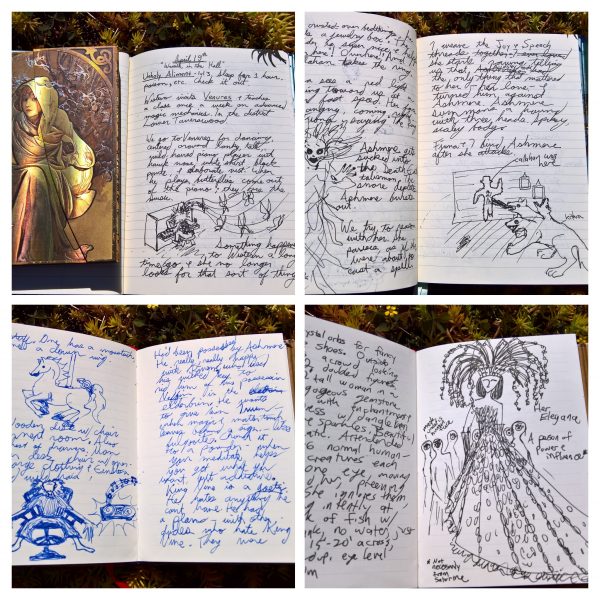 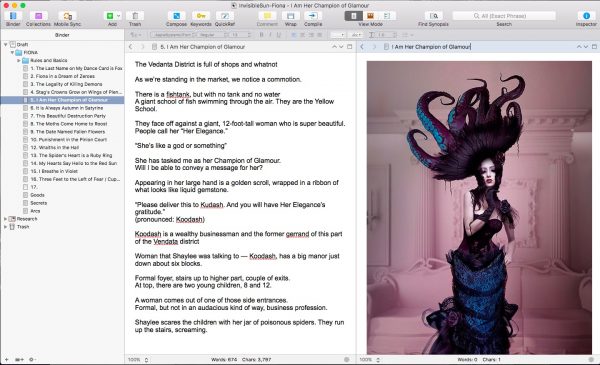 In addition, Shanna keeps a Pinterest board called Fiona’s Conjured Closet. It is the “wardrobe” of her Invisible Sun character, Fiona Speares. Each piece and its title depicts an important moment in her character arc.

(Just to be really clear, like most art found on Pinterest, the art shown in Fiona’s Conjured Closet above, and the images I’ve added to my own notes below, were found on the internet, do not belong to MCG, and are merely inspiration for our home game!)

But much as I love Scrivener, I wanted to try something different. The conceptual load of Invisible Sun, which combines rich story with lore and secrets, and my desire to have something electronically searchable, led me to a great note-taking app called Keep. With Keep, I can look at several notes at once, delve down into just one, add pictures that help me remember what happened in the session (which means I sometimes find something online, other times I ask Susan if I can snap a pic of something she’s drawn), and electronically search my notes for key ideas and names after the fact. (I also use Keep to keep track of my spells and Ephemera, also keyed to pictures that help me distinguish one from the other at a glance). 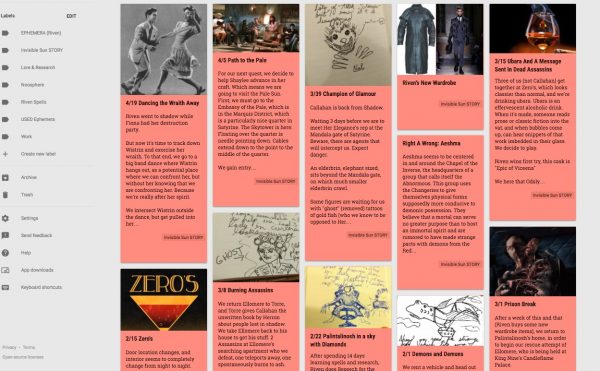 When Invisible Sun was first conceived by Monte, the assumption was that players would be discovering all manner of secrets about the layers of truth underlying reality’s facade, and so would need to record everything they learn. Doing so makes characters more capable, and gives them more options. But it also fleshes out the world. As our notes slowly chisel out a strange shape and unexpected structure from the blank stone of ignorance, we continue to learn that, as we suspected, the world wasn’t what we thought it was.